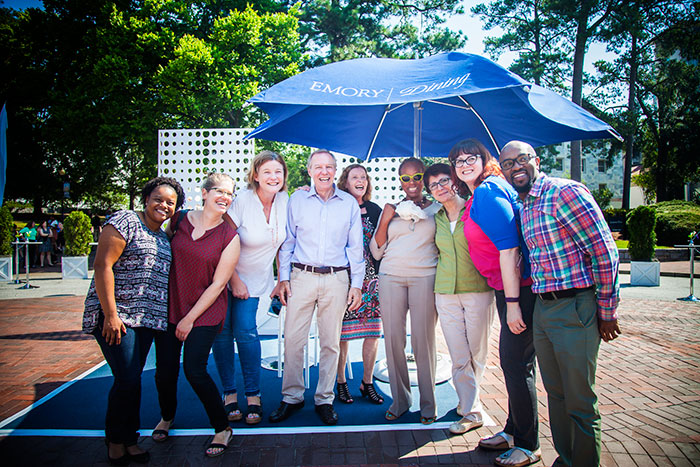 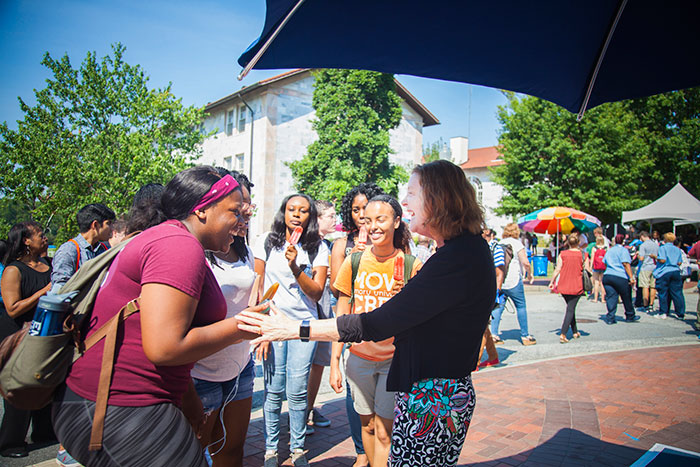 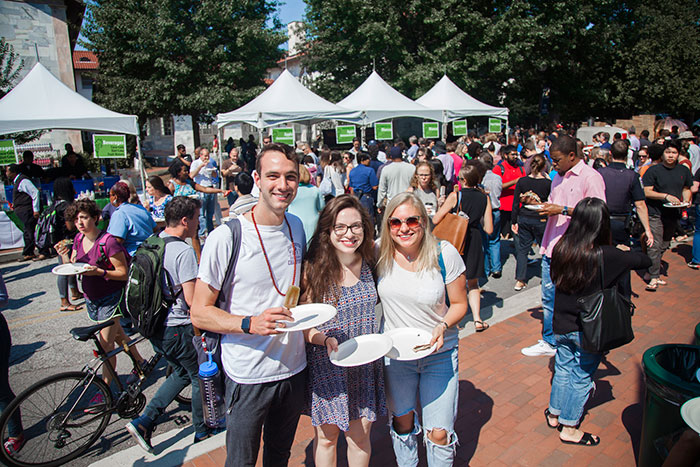 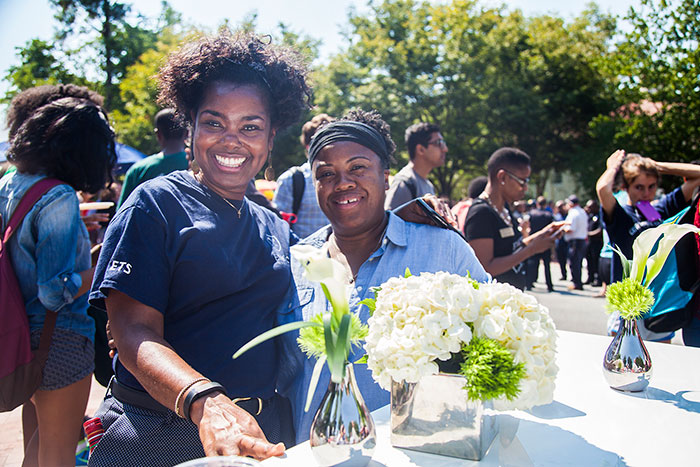 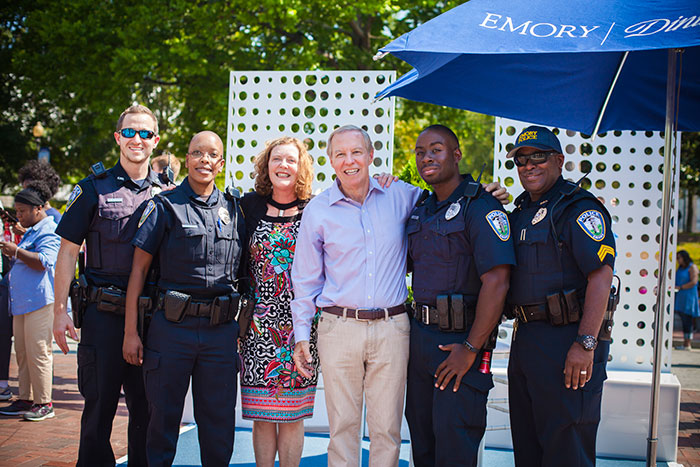 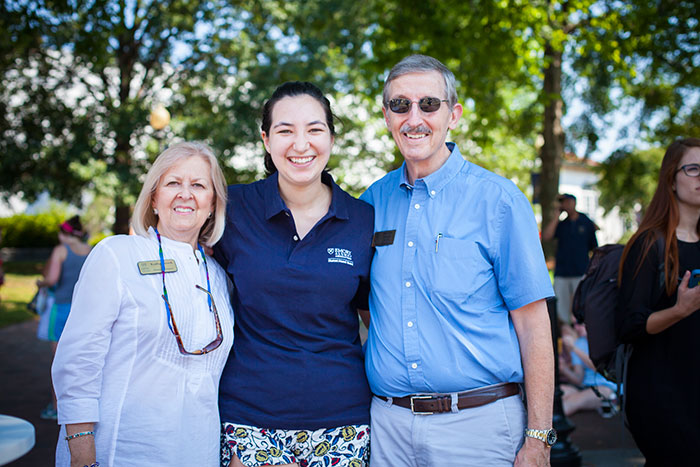 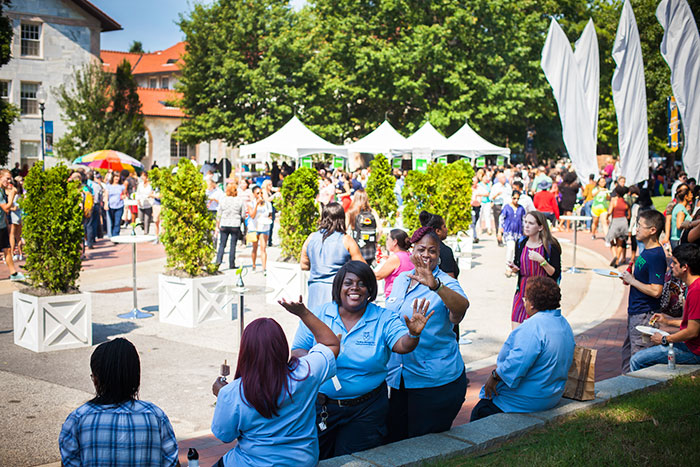 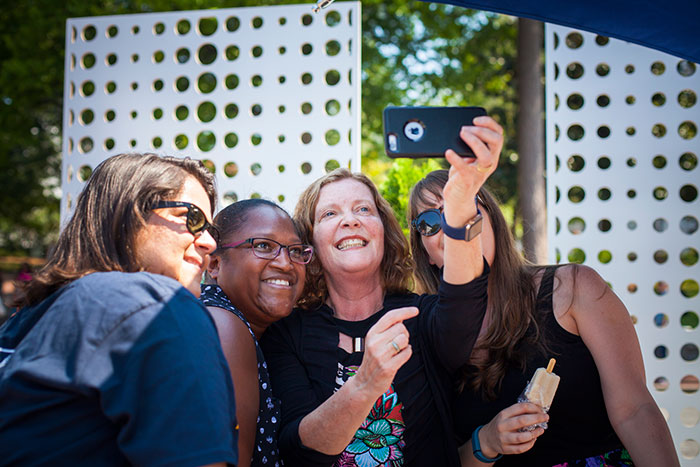 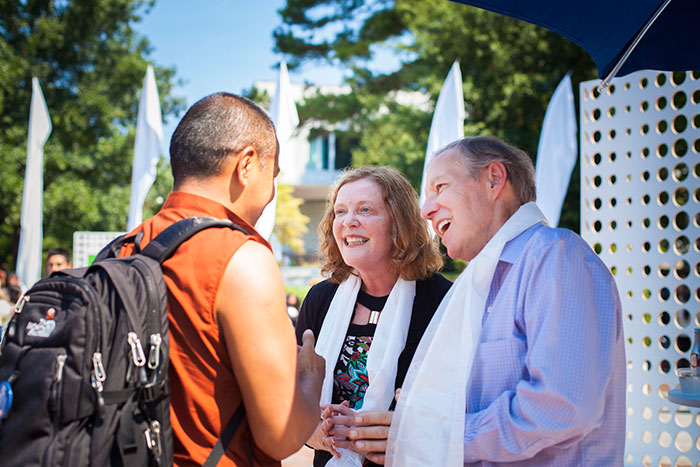 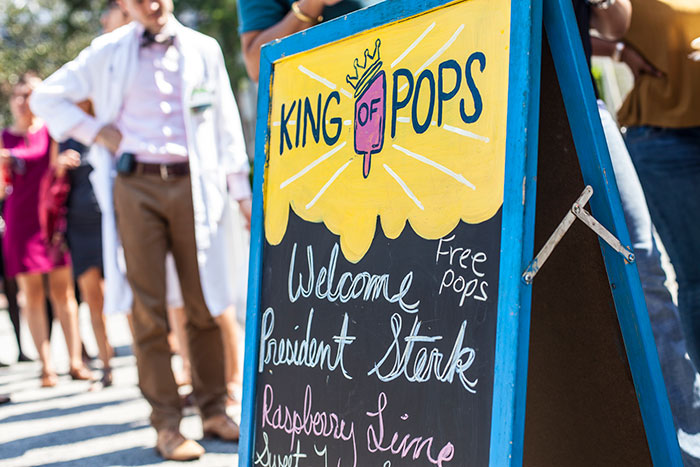 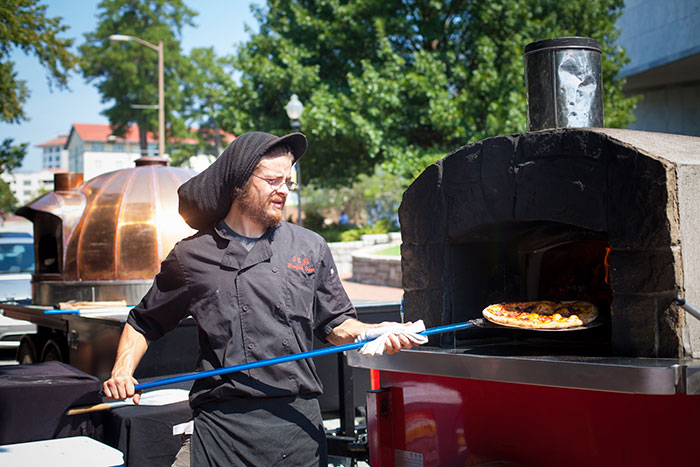 As the lilting strains of a live jazz combo and the heady aroma of wood-fired pizza filled the air, well-wishers queued up for a chance to greet Sterk and her husband, Kirk Elifson, a research professor in behavioral sciences and health education at the Rollins School of Public Health.

For many, the moment also created an impromptu photo opportunity, as a steady stream of friends old and new snapped selfies with President Sterk throughout the event.

“This is such a wonderful event,” Sterk said. “Kirk and I are so pleased that so many members of the Emory community braved the heat to say hello, snap a photo, and extend such a warm welcome to us. We really appreciate the outpouring of support and friendship.”

Smiling and chatting with others in line waiting to meet Sterk, Jennifer Crabb Kyles 98OX 00C couldn’t hide her feelings of happy anticipation at the chance to shake the hand of Emory University’s 20th president.

“I am excited on so many levels,” said Crabb Kyles, who is senior director of operations for the Emory Alumni Association. “I’m excited that she’s a woman, I’m excited because she’s brilliant, and I’m excited because it just feels like a new day, a new chapter for Emory and a chance to take things to the next level.”

For Mansi Maini, a junior in Emory College, the chance to enjoy a cool King of Pops treat on a warm day was overshadowed by the larger meaning of the event — an opportunity to come together to celebrate the new face of leadership at Emory.

“I feel like gatherings like this are one of the few times that Emory gets together as a community,” Maini said. “And having the chance to see Emory get its first female president is just great, especially in light of what’s happening on the national political scene this year.”

"Dr. Sterk is more than qualified to be our president,” she added. “I’m really looking forward to seeing the great things she does.”

A current of excitement pulsed through the crowd, as the community lined up for free pizza (330 pies were served by S & J’s Woodfired Pizza), hundreds of Coca-Cola beverages and King of Pops popsicles.

“The mood is festive and fun, almost like a family reunion,” observed Obse Ababiya, a program coordinator at the Emory Institute of Developing Nations in Laney Graduate School.

Emory and Oxford College alumnus Warren Brook 70OX 72B and his wife, honorary Oxford alumna Kathy Brook, joined the party for the chance to commemorate what Brook predicts will be “an easy transition” for Sterk, an academic leader and acclaimed researcher in public health and anthropology who most recently served as Emory’s provost and executive vice president for academic affairs.

Sterk, who was unanimously chosen by the Emory University Board of Trustees to succeed former Emory President James Wagner following an intensive national and international search, officially assumed her new role on Sept. 1.

Brook said he was especially pleased that Sterk already knows the University well — she’s been a member of the Emory community since 1995, when she was appointed to the faculty of the Rollins School of Public Health — and heartened to know that she’s also “a close friend of Oxford College.”

Surveying the generous turnout, the Rev. Bridgette Young Ross, dean of the chapel and spiritual life, observed that it was good to have an opportunity to come together as a community “with joy to celebrate Claire being our new president” and to formally mark a historic moment in the life of the University.

Noting the many capacities in which Sterk has served the University, Philip Wainwright, vice provost for international affairs, said the event provided a chance to embrace a sense of community, excitement and new possibilities.

“I reported to her when she was the provost and know all the strengths she brings to her new role,” he said. “I’m very excited about the potential.”