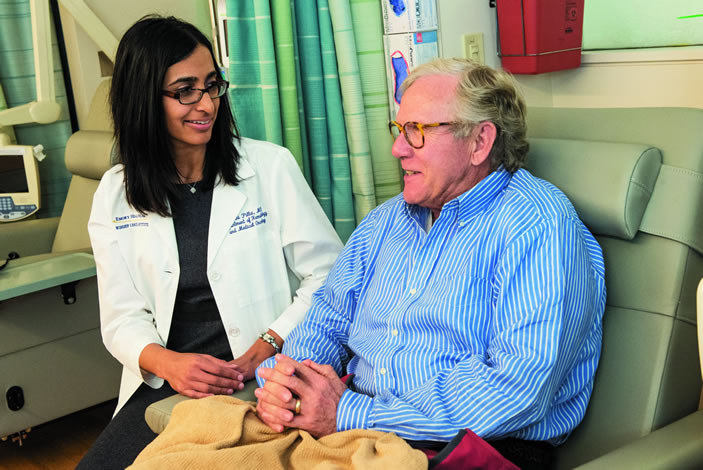 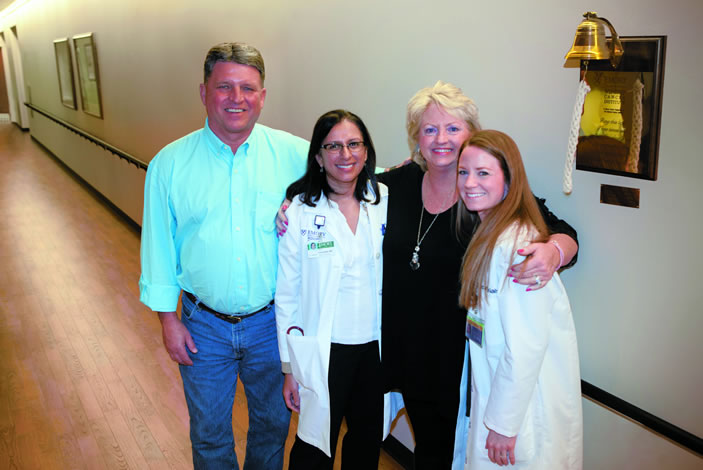 • Ramping up the immune response. The first immunotherapies, cytokines such as interferon, stimulate the growth of immune cells.

A decade ago, there were few effective treatment options for patients with advanced melanoma or lung cancer. That's changing, thanks to new immunotherapy drugs which can unleash a patient's own immune system. An Emory scientist's groundbreaking discoveries pointed the way to the new therapies, and Winship Cancer Institute's clinical investigators have been involved in clinical trials of almost every immunotherapy drug approved by the FDA. While patients benefit from an increasingly wider range of treatment options, Winship clinical and laboratory investigators take on the challenge of making these therapies even more effective.

Take the example of lung cancer.

In 2014, Danny Foshee experienced a sudden onset of extreme chest pain. He thought it was his heart, but a CT scan identified abnormal spots on his right lung. Biopsy results showed non-small cell lung cancer. His local oncologist ordered a PET scan and tumors lit up like Christmas tree lights. The largest was the size of a baseball. With cancer too advanced for surgery, a clinical trial was recommended.

Soon after, Foshee met with Suresh Ramalingam, Winship deputy director and director of medical oncology, and Rathi Pillai, the medical oncologist who would become Foshee's primary Winship physician. After reviewing his case in detail, they asked Foshee if he would like to be considered for a clinical trial under way at Winship that compared the effectiveness of traditional chemotherapy which—directly attacks cancer cells but also other fast-growing cells in the body, such as hair follicles—and a new immunotherapy treatment designed to strengthen the immune system's ability to recognize and fight cancer cells.

He was enthusiastic, as was his referring physician, but to be eligible for the appropriate trial, he needed to have one of three biomarkers on his tumor cells. Results from the first biopsies were negative. Then, only days before the trial closed to new patients, he tested positive for high levels of PD-L1.

As Ramalingam and Pillai explained to Foshee, producing the protein PD-L1 is one way cancer outsmarts the immune system. On non-cancerous cells, PD-L1 signals the immune system not to attack. That can be very useful, for example, during pregnancy when PD-L1 plays an important role in immune system tolerance of the fetus. But when cancer cells produce PD-L1, its presence on the cells tricks the immune system into not recognizing an enemy that should be attacked. Patients with high levels of PDL1 in tumor cells—and in the immune cells surrounding lung tumors—often do not respond as well to treatment.

The good news for Foshee, however, was that his high levels of PD-L1 made him eligible for a clinical trial studying nivolumab, a new drug which blocks PD-1, the receptor to which PD-L1 binds (see Ahmed sidebar). The study asked: in patients with high PD-L1 levels, would immunotherapy with a PD-L1 inhibitor work better than chemotherapy?

Participants were randomly assigned to either immunotherapy or chemotherapy. Foshee drew chemotherapy, which meant he would receive the same drugs given patients outside of clinical trials. At first, he responded beautifully. Tumors shrank quickly. For a particularly large one pressing painfully on his spine, radiation oncologist Kristin Higgins recommended and delivered a course of radiation treatments. That tumor shrank in response to the therapy.

Then, after two treatments, chemotherapy stopped working. The tumors took off again.

Being in the clinical trial gave Foshee another option. He was switched to the study's immunotherapy arm. Every two weeks for the past year, he and his wife Coopie have driven almost three hours from Vidalia in South Georgia to Winship's infusion center. Two months after immunotherapy began, his tumors had reduced in size by half. Ongoing scans show increasing shrinkage and no spread of cancer. His worst side effect has been some itching.

While the trial was still going on, the U.S. Food and Drug Administration (FDA) approved nivolumab for patients with metastatic non-small cell lung cancer resistant to chemotherapy, which described Foshee to a T. (Now known by its trade name Opdivo, nivolumab had been approved for patients with advanced melanoma a few months earlier.) Ramalingam, a national leader in clinical trials for lung cancers, led one of the two trials that spurred this go-ahead for lung cancer. Several other drugs recently approved for lung cancer also have gone through clinical trials at Winship under his direction.

When the Foshees see ads for Opdivo on television, they justifiably feel pride in helping move such studies forward. They have a lot of company. Winship doctors see roughly 700 new patients a year with newly diagnosed lung cancer, and an increasing number of these patients are treated with immunotherapy, many in clinical trials. A re-energized Foshee is an inspiring example of why clinical trials are so important in the fight against cancer.

Use of immunotherapy is likely to expand for lung cancer patients, says Ramalingam. Certain lung cancers are among the most responsive, equaled only by melanoma. Lung cancer has more mutations than many other cancers, providing more protein "hooks" for the immune system to recognize and respond to.

While new drugs like nivolumab are game changers for patients like Foshee, there are many more patients for whom the drugs are not effective. Ramalingam's goal is to develop biomarkers to predict which patients will respond to which drugs and what can be done to turn nonresponders into success stories. He also wants to change the fact that immunotherapy currently is used only in advanced cancers. He leads the Thoracic Cancer Committee of the ECOG-ACRIN Cancer Research Group, a national federally funded organization that is launching a large clinical trial of immunotherapy to prevent recurrence in patients whose early lung cancer can be removed by surgery.

That is just the kind of thinking Wally Curran, executive director of Winship Cancer Institute, wants to see happen. Curran says science has understood for decades that the patient's own immune system has the potential to control cancer. The earliest agents, like interleukin, were meant to stimulate and add to the immune system. This approach was effective to varying degrees but often with very high toxicity. In the last decade, he says, "we have discovered how to unlock the patient's own immune system, enabling T cells to identify cancer as a foreign agent—and we are doing it with less or no toxicity." He's excited by how fast the field is moving, but as amazing as the recent breakthroughs have been, and as proud as he is of Winship's role in bringing new drugs to market, he and his Winship colleagues aren't yet satisfied. Every advance brings new questions, such as why drugs work only for certain subtypes of cancers, and how responses can be made more durable.