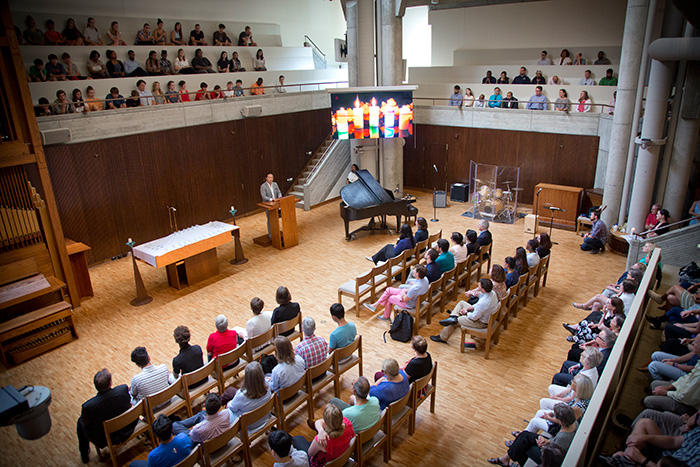 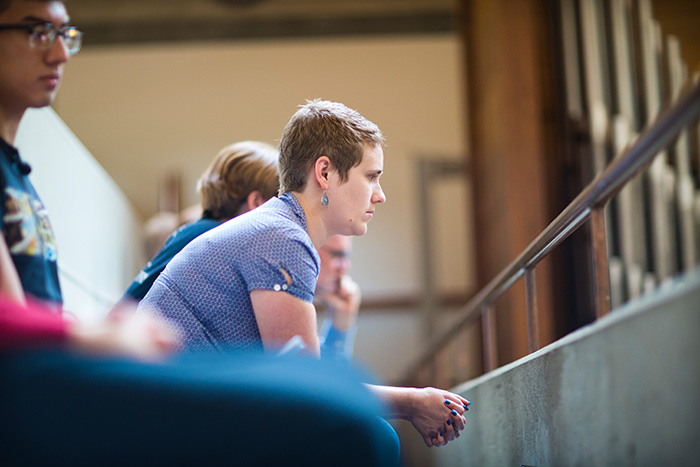 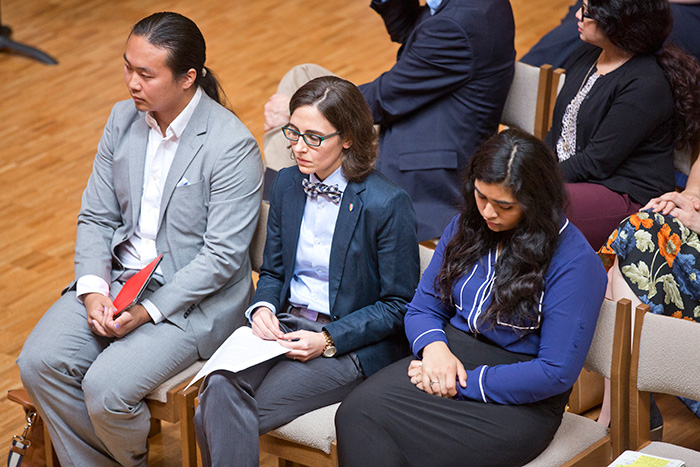 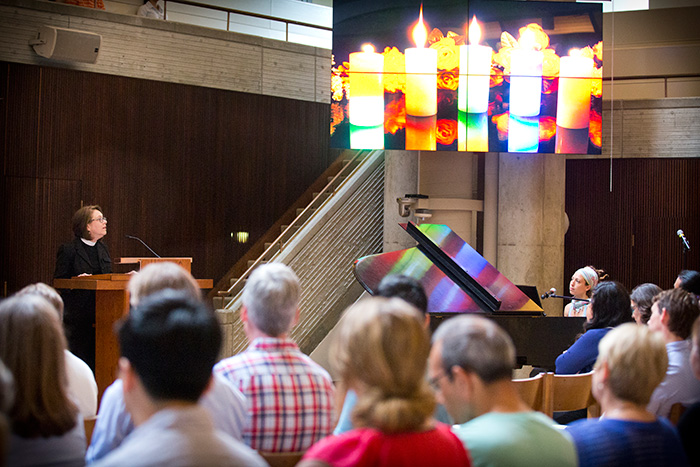 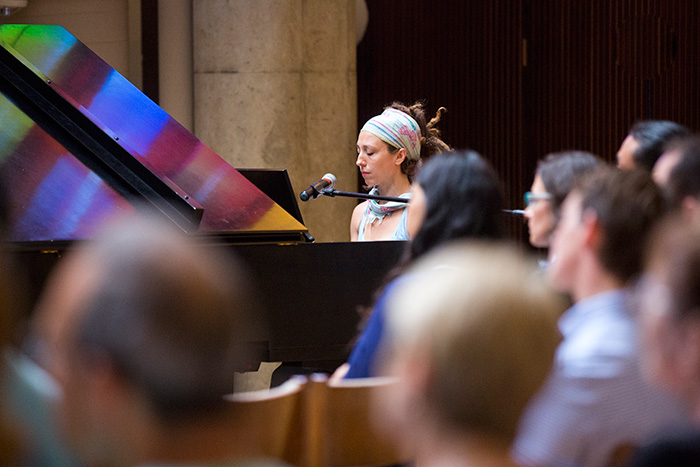 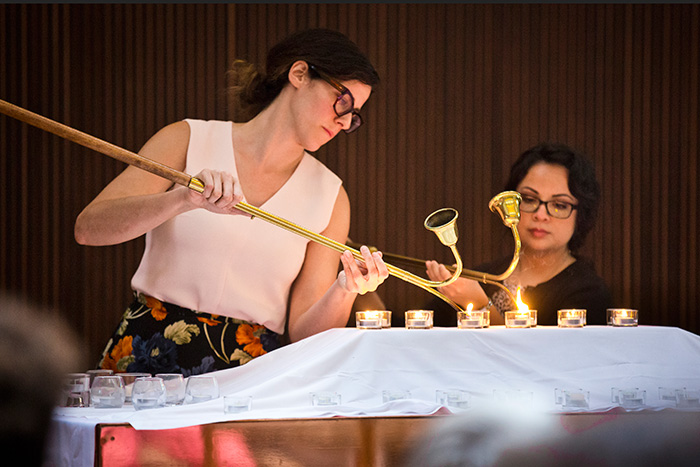 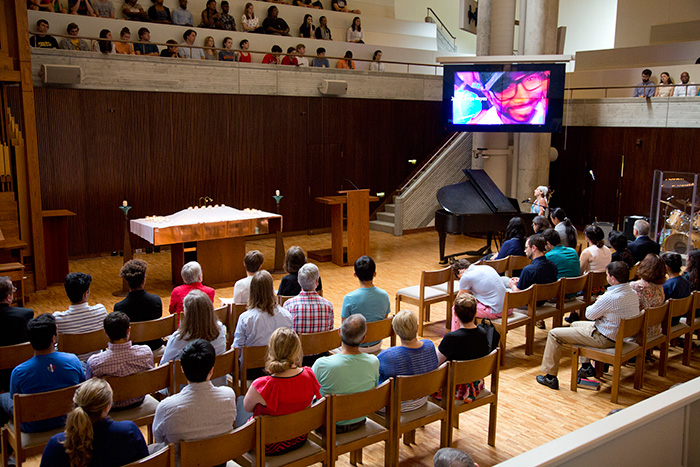 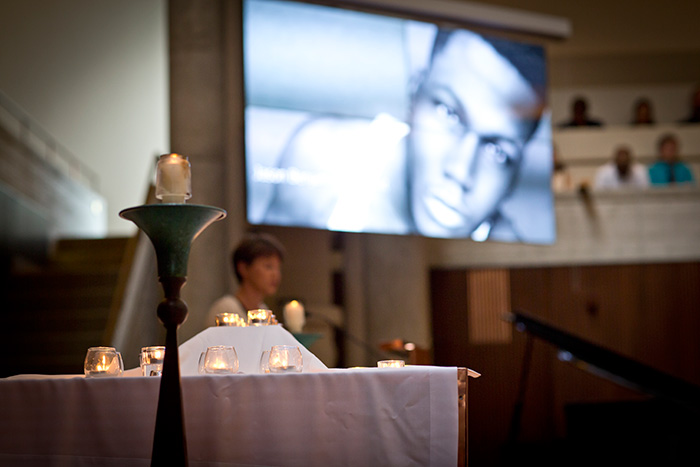 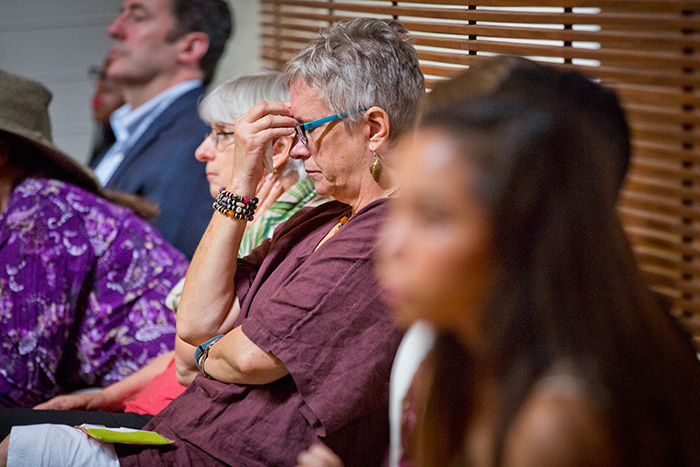 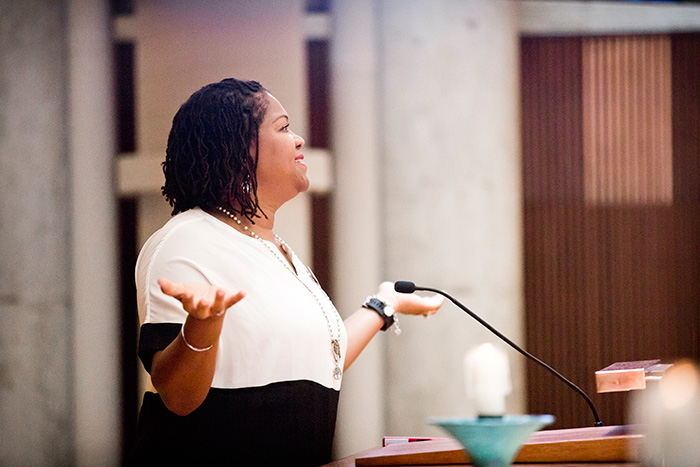 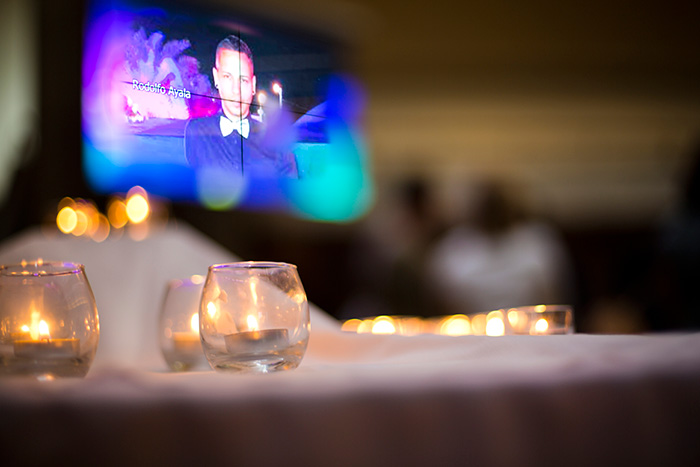 The Emory community filled Cannon Chapel on Tuesday, June 14, to mourn the victims of the attack at an Orlando LGBT bar, the deadliest mass shooting in U.S. history.

Ways to give and receive support

On Monday, Ajay Nair, senior vice president and dean of Campus Life, and Bridgette Young Ross, dean of the chapel and spiritual life, issued a letter to the Emory community expressing shock and sympathy in the wake of the "horrible and senseless" shooting in Orlando.

"This tragedy reminds us that we must not allow terrorism and hate to change who we are — a campus community that strives anew every day to be ever more welcoming to all, regardless of sexual orientation, race, ethnicity, disability, religion, ideology, or the many other distinctions that make us unique individuals," the letter said.

The deans stressed that campus resources are available to help those who are impacted by the attack. Counseling and Psychological Services offers confidential individual and group counseling for students (additional student resources are listed at success.emory.edu/resources). The Faculty Staff Assistance Program provides similar services for employees.

In addition to announcing Tuesday's gathering, the deans' letter listed other ways that the Emory community could reach out to show support and help others:

• Participate in the #WeAreOrlando gathering at the Center for Civil and Human Rights in downtown Atlanta, Tuesday, June 14, at 7 p.m.

• Join the Emory Muslim Students Association to provide donations to families of victims and survivors.

"Emory University is a polycultural community that celebrates the intersections of identities and respects the diversity that strengthens our community and society," the deans wrote. "We stand in solidarity with the people of Orlando and with the LGBT, Latinx, and Muslim communities on our campus, in Florida, nationwide, and worldwide."

Amid soft piano music and muffled tears, 49 names rang out from around Cannon Chapel as the Emory community gathered Tuesday to mourn the victims of the Orlando massacre, the deadliest mass shooting in U.S. history.

As the names were read by volunteers in the chapel balconies, a video screen displayed photos of each individual, the smiling selfies providing a poignant reminder that the victims were struck down during what should have been a night of fun and solidarity at Pulse, an LGBT nightclub that was hosting its popular Latin night when the killer opened fire.

President Obama called the June 13 shooting both an act of terrorism and a hate crime, and speakers at Emory's gathering not only remembered the dead, but called for systemic change.

"To think that the killer's beliefs and hatred came into existence in a vacuum, without reinforcement and encouragement, is to deny systems and institutions of oppression that perpetuate and condone violence," Danielle Steele told attendees at the gathering, which was co-sponsored by Emory’s Office of Spiritual and Religious Life and two Campus Life offices — the Office of LGBT Life and Multicultural Programs and Services.

Steele, director of the Office of LGBT Life, noted that it has been almost a year since the Emory community came together to celebrate the U.S. Supreme Court's decision allowing same-sex couples to marry around the country.

"As so many marginalized communities have experienced before, each step towards justice comes with the risk of backlash," she said. "To deny that the recent victories of the LGBT community have brought retaliation ignores the ongoing struggle that so many LGBT people engage in every day."

Noureen Shallwani, a senior in Emory College and recent executive board member for the Emory Muslim Students Association, spoke of how she and her Muslim peers found the attack "truly shocking" and incomprehensible, leaving them to grapple with what to do and how to get involved.

"That is what my religion has taught me," Shallwani continued, stressing, "What transpired is not part of my faith at all. This wasn't Islam."

DeLa Sweeney, assistant director for Multicultural Programs and Services, described being unable to consider the attack outside of personal experiences — as a student affairs professional, a counselor, a person of color and someone who identifies as gender queer, but also as someone with privileges including economic stability and health insurance.

"As a community, while we honor the victims and stand in solidarity with the families, friends and community, and grieve for ourselves, I hope we continue to transform both ourselves and our societies," Sweeney said.

As volunteers prepared to read the names of the deceased and light candles for each, Ellen Purdum, assistant dean for student life and spiritual formation in Candler School of Theology, called upon those in attendance to remember them as individuals with vibrant lives cut short.

"Names matter because of their particularity, the particularity that points to the unique mystery of every human life," she said.

With the nearly hour-long program of words and music drawing to a close, Lisa Garvin, associate dean of the chapel and religious life, offered a quote from Mahatma Gandhi: “When I despair, I remember that all through history the way of truth and love has always won. There have been tyrants and murderers, and for a time, they can seem invincible, but in the end, they always fall. Think of it — always."

"We have gathered here to be strengthened in community to do the hard work of justice and compassion," she said.

"We have gathered here because love wins."