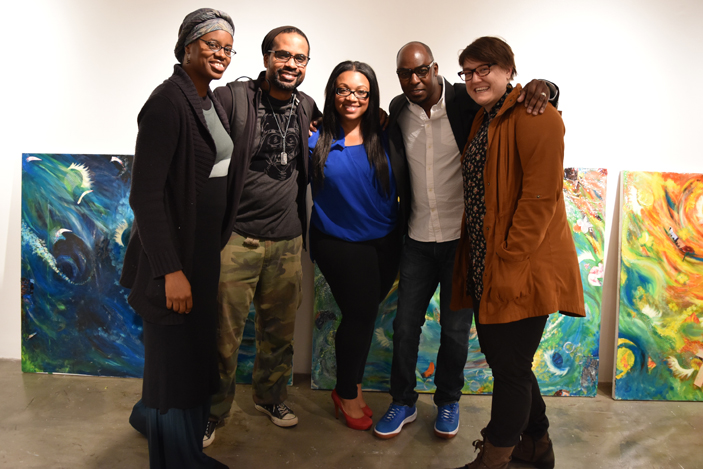 "Art and Social Engagement" participants pose with a mural created for Solomon's Temple. 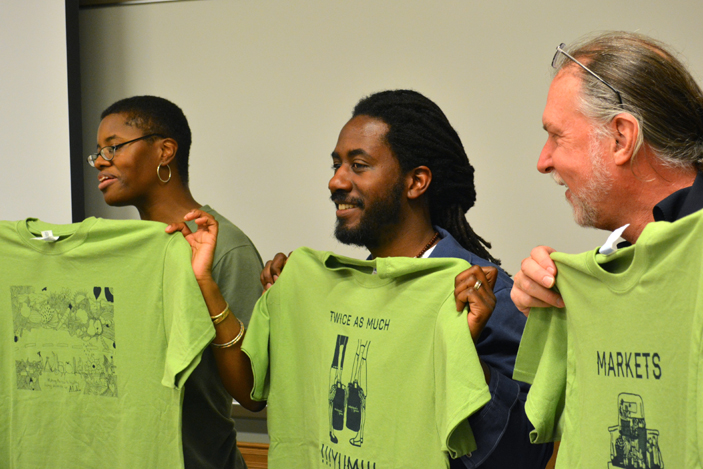 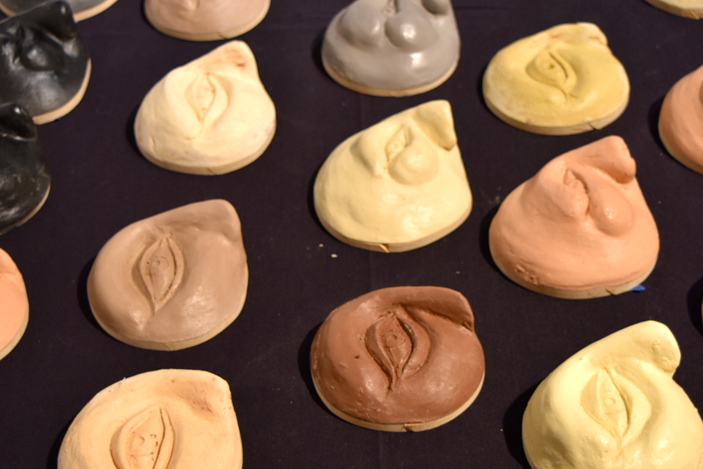 A series of 100 small hand-sculpted faces created for the Partnership Against Domestic Violence illustrate the statistic that one in four women will experience domestic violence.

When is a t-shirt a tool for social change? Can sculpture become a plea for public awareness? And how does a mural express a celebration of human resilience?

In the hands of Emory students, those kinds of questions were not only fodder for classroom discussion, they became artistic inspiration for a series of projects created in collaboration with community artists to benefit Atlanta nonprofit organizations.

This marks the second year that the course “Art and Social Engagement” has been offered through Emory’s Center for Ethics in partnership with the Atlanta arts non-profit WonderRoot and with support from Southwest Airlines. The goal of the three-hour class is to unite Emory students, Atlanta artists and nonprofits to develop socially engaged artwork.

And interest in the program is booming, says Carlton Mackey, director of Emory's Ethics and the Arts Program, who runs the class with Edward Queen, director of the D. Abbott Turner Program in Ethics and Servant Leadership (EASL) at Emory's Center for Ethics.

“The first year we proposed the course we had a dozen students sign up,” recalls Mackey. “This year we had close to 30 undergraduates and master’s students from disciplines throughout the university.”

“Students find an opportunity to enhance their academic pursuits with real life issues, as well as learning more about the people and organizations addressing those issues,” he says.

In each case, a local artist collaborated with a team of students and a nonprofit to better understand the scope of the organization’s issues and conceptualize an art project to meet their unique needs.

The final works were unveiled at a recent event at the Woodruff Arts Center, showcasing the following projects:

Working with artist and photographer Michael Reese, the student team created a documentary film that profiles the work of AHRC.

The project includes interviews with the program director about the nonprofit’s mission and challenges, and profiles of several people who have used AHRC as a resource, including individuals who are HIV-positive, have Hepatitis C, and those who struggle with addiction, Mackey says.

“You hear their stories, the value this organization has in their lives and what it’s doing for them on their journey of recovery — reducing stigma and providing the ability to get treatment,” he says. “For AHRC, it’s a tool for advocacy. These are real stories, real people.”

In collaboration with mixed media artist Masud Olufani, the student team helped research and conceptualize an art installation for the Partnership Against Domestic Violence that seeks to “embody and personify the statistic that one in four women will experience domestic violence,” Mackey says.

The resulting artwork consists of a series of 100 small hand-sculpted faces created by Olufani, each with varying expressions. Every fourth expression reflects the impact of some form of abuse.

When Darci Rodenhi Jaret, a master of divinity student at Candler School of Theology, enrolled in the course, she arrived with a project in mind.

Jaret had previously volunteered with Solomon’s Temple, a component of Restoration ATL, which offers residential transitional housing for women and their children.

It was a cause close to Jaret, who had once been homeless herself. “Before engaging with the Ethics Department, I was holding group conversations with the women at the shelter, where we would talk about our journeys,” she says.

“One thought that came out of that was even in dark times we can still look back and see the presence of something greater than us,” she explains. “I hope to be a pastor at some point, so we looked at that through our own faith journeys.”

So Jaret collaborated with residents to create a large, three-piece, mixed media mural, with swirling colors that evolve from dark and brooding to bright, sunny hues, “moving toward the future in a hopeful way, as if the dawn is happening.”

The work will be a permanent installation at Solomon’s Temple. Student team members included Yujun Yan and Jennifer Hwang.

Printmaker and fiber artist Jerushia Graham worked with an Emory student team to design and create t-shirts to promote access to healthy, locally grown, fresh food options for all Georgians.

In Georgia, nearly 2 million people — one in five Georgians — receive Supplemental Nutrition Assistance Program (SNAP or Food Stamps) benefits each month. Through Wholesome Wave Georgia’s “SNAP 2-for-1” program, those recipients can double the value of every SNAP dollar spent on fresh, healthy food by making those purchases at nearly 40 partner farmers markets.

“The project was basically working with these students … to design things that could be screen-printed onto t-shirts and bags to help promote the programs and services that Wholesome Wave provides,” Graham explains in a documentary film about the project.

Working with Graham, the students had a hand in virtually every step of the process, from the research and conceptualization of the products to the design and screen-printing, Mackey says.

With continued financial support from Southwest Airlines, the three-hour credit course will again be offered in Spring 2016, Mackey says. Those interested in the class are encouraged to consult Emory’s course atlas.