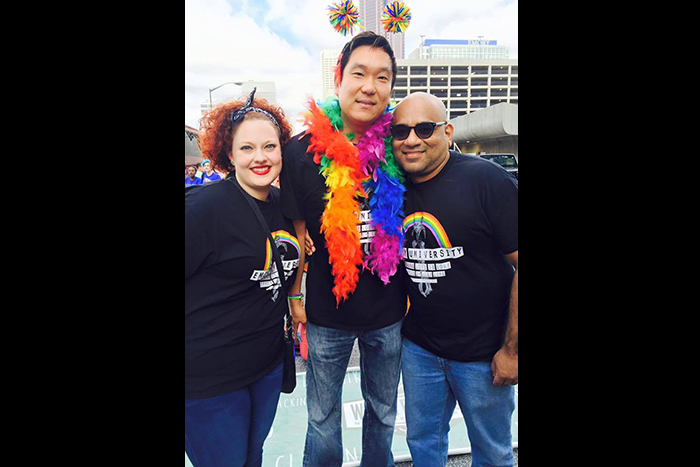 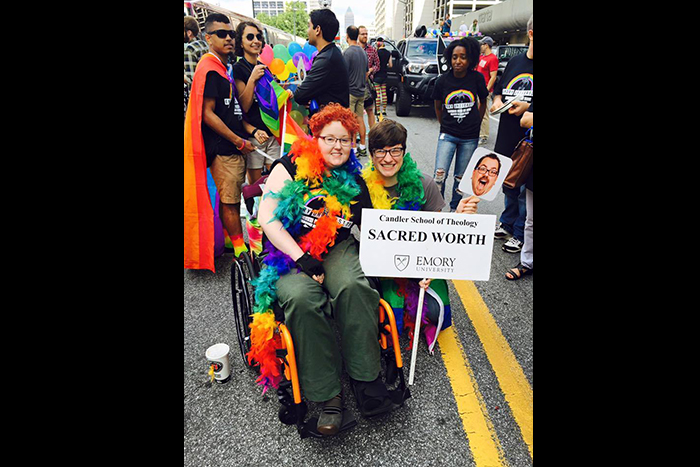 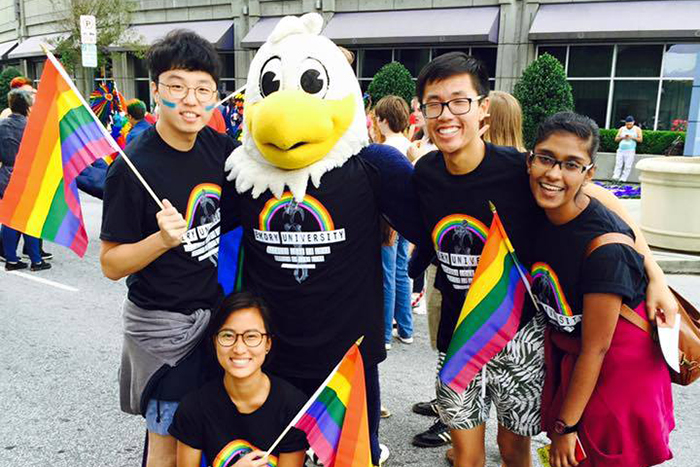 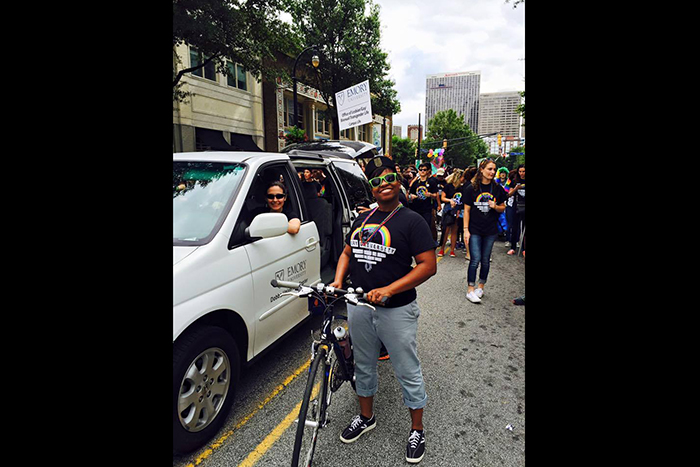 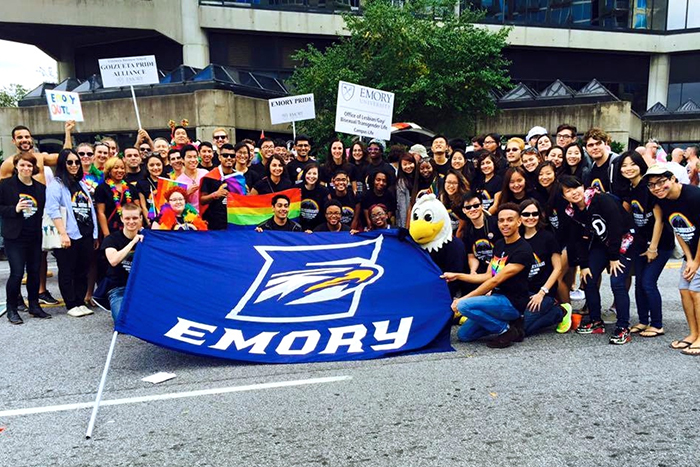 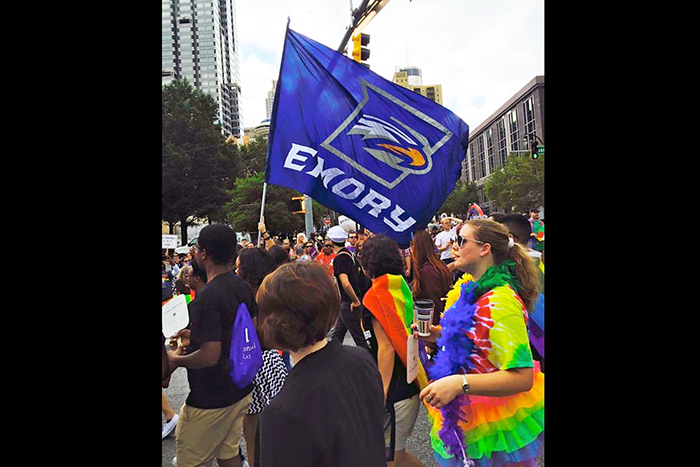 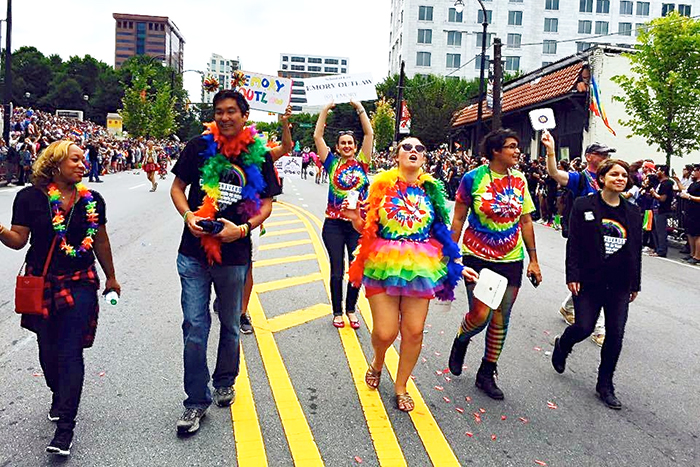 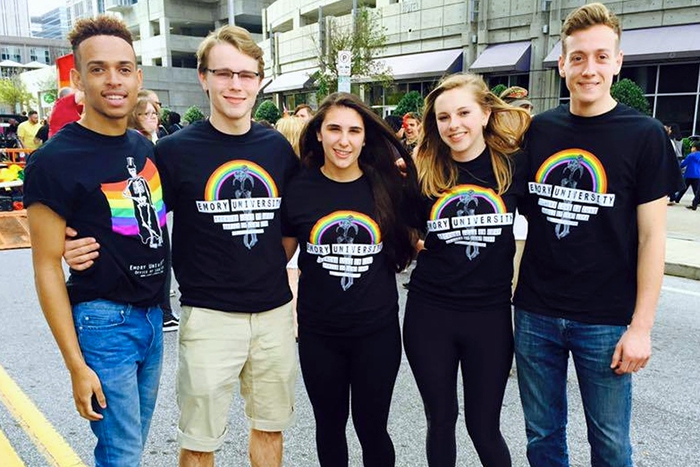 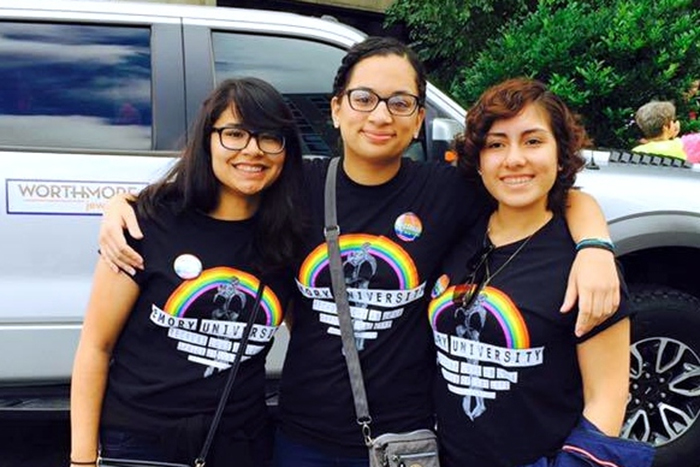 Dozens of Emory marchers joined in the Atlanta Pride Parade on Sunday, Oct. 11, taking to the streets of Midtown Atlanta to celebrate the fight for LGBT equality.

More than 75 Emory students, staff, faculty, alumni and friends were accompanied by Swoop, Emory's eagle mascot, as they marched with Emory's flag in the parade, which coincided with National Coming Out Day and is the largest parade in the city.

The event took on additional meaning this year as Atlanta Pride marked its 45th anniversary in the wake of the U.S. Supreme Court decision legalizing marriage for same-sex couples nationwide.

"Marching in the Atlanta Pride Parade builds community among LGBTQ students, faculty, alumni and staff of Emory, and walking down the heart of the city sends a strong message to Atlanta that Emory University values and celebrates the diversity of its community members," says Danielle Steele, interim director of Emory's Office of LGBT Life.

"Not only do people meet each other from different areas of the university, but alumni and others get to see Emory’s continued commitment to the LGBTQ community," notes Steele, who also serves as interim director of the Center for Women. "Plus, those who march feel empowered and affirmed by the over 150,000 spectators cheering them on along the route."

Emory has long been a leader for LGBT rights in the South. In August, Emory was named the "most LBGTQ-friendly school" in Georgia, according to a review from eCollegeFinder, a website dedicated to matching colleges and prospective students.

In 2014, the Atlanta Pride Committee, organizer of the Pride festival, selected Emory's Michael Shutt, interim director of the Center for Diversity and Inclusion, to serve as a parade grand marshal — among the highest honors in the local lesbian, gay, bisexual and transgender community.

Also in 2014, Campus Pride named Emory to its list of Top 50 LGBT-Friendly Colleges and Universities. Emory was the only university in Georgia and among only three colleges and universities in the southeastern U.S. to be included in the Top 50.