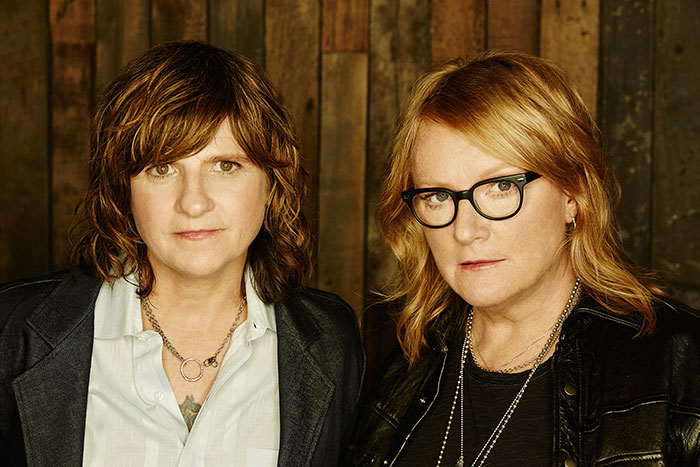 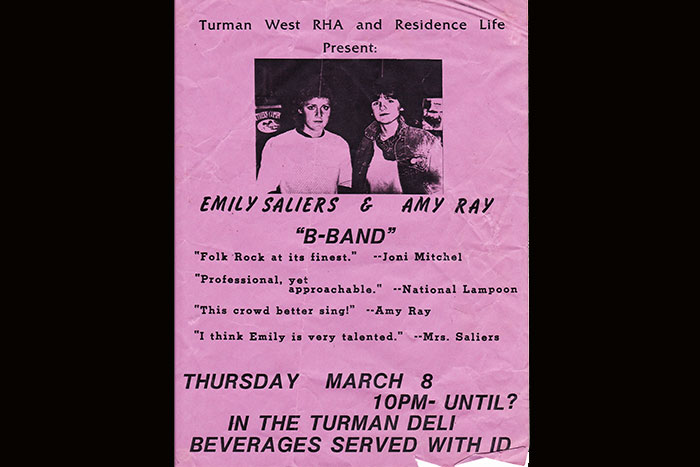 As students at Emory, Emily Saliers and Amy Ray played concerts on campus as "B-Band" before deciding on the name "Indigo Girls." 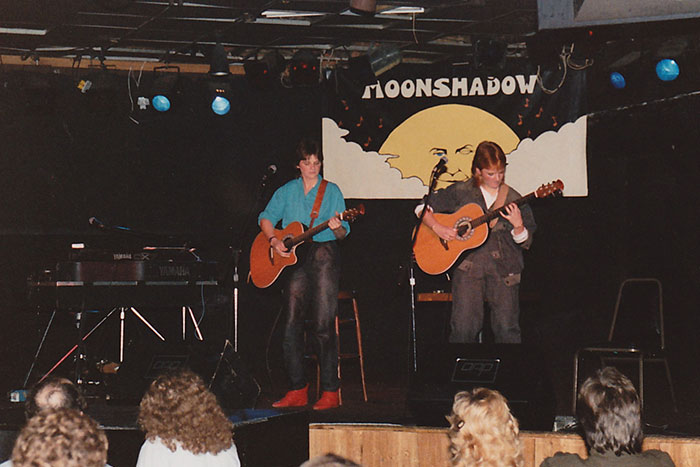 Indigo Girls Amy Ray and Emily Saliers on stage at the Moonshadow Saloon in Atlanta while both were students at Emory. 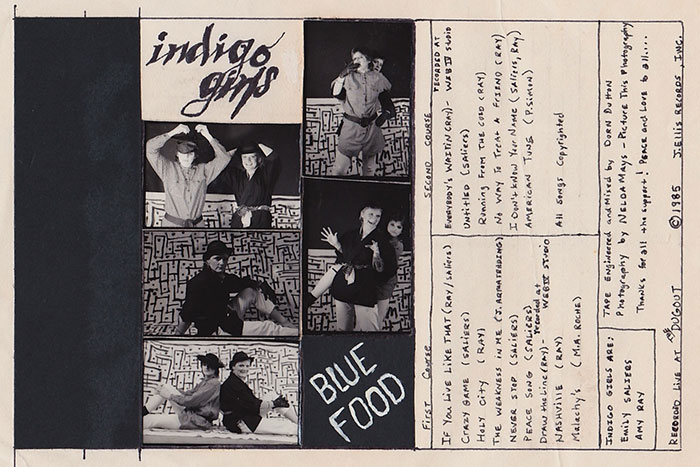 Indigo Girls put out their first homemade cassette, "Blue Food," in 1985. Songs were recorded live at The Dugout, a hangout on Oxford Road across the street from campus, and the cassette covers were handwritten.

Emory's 2015 Homecoming Concert is a homecoming for the performers, too — both Indigo Girls and opening act The Shadowboxers include Emory alumni.

Indigo Girls is made up of Emily Saliers 85C and Amy Ray 86C; The Shadowboxers include founding members Scott Schwartz 11C, Matt Lipkins 11C and Adam Hoffman 11B.

The two bands have shared the stage many times before, including Emory Homecoming in 2010 and when Indigo Girls invited The Shadowboxers to open for them on previous tours.

"I met Scott Schwartz at a seder and fell in love with his voice singing the seder music … We've co-written some stuff and they feel like my little brothers in a way," says Saliers, describing her "utter delight" at the band's success.

The two groups will likely sing something together during Saturday's show, which Saliers and Ray say will also contain a mixture of both familiar Indigo Girls' favorites and tunes from their new album, "One Lost Day."

"It will be a total mixture and it will be fun," Ray promises.

Nothing will dampen the duo's enthusiasm for returning to the campus that helped launch their musical career 30 years ago, Saliers pledges.

"I can tell you that we're both really honored to be asked to play and excited to come back," Saliers says. "I hope the sun is shining, but even if it's not, it's going to be full of a lot of positive energy, that's for sure."

As the Grammy Award-winning Indigo Girls take the stage at McDonough Field for Saturday's Homecoming concert, it might seem a far cry from their days as students at Emory.

Back then, the duo of Emily Saliers 85C and Amy Ray 86C performed shows at residence halls, sold homemade cassettes on campus and had to explain to professors why they missed class for out-of-town gigs. Now, they are in the midst of the tour for their 16th studio album, "One Lost Day," with devoted fans around the world.

But while the songs, and the women behind them, have grown and evolved over three decades, their essence remains the same: introspective lyrics, soaring harmonies, acoustic guitars and a deep desire to make a difference through music.

"Looking back, it's remarkable, for a lot of reasons," Saliers says. "To stay with someone that long and play together for that long and to not have to compromise our music in any way — it's been an incredible trajectory."

And although it's a trajectory that has taken them far beyond the campus gates, it's also one that keeps them coming back to Emory — as performers, speakers and supporters of campus causes ranging from a prison music ministry to Saliers' helping fund a music room at Schwartz Center for Performing Arts named for her parents.

"I have so many connections to Emory, and I'm proud of Emory. I feel at home there," Saliers says. "Emory is just woven in the fabric of my life."

Ray also notes her pride in Emory, although she jokes that she might not have been accepted if she were competing against today's crop of outstanding students.

"When I think about when we were there, the difference between then and now is incredible. The school has grown, the campus has grown, the programs have grown, and the emphasis on ethics and diversity has grown," Ray says. "Everything you want a school to evolve into, for me, Emory has become."

Saturday's concert will be far from the first time Saliers and Ray have come home to Emory. In addition to their multiple appearances on campus in the years since they graduated, attending Emory was a homecoming of its own.

Both have deep roots in the university. Saliers' father, Don Saliers, became a theology professor at Emory in 1974; he is now theologian-in-residence at Candler School of Theology and William R. Cannon Distinguished Professor of Theology and Worship, Emeritus. Her family attended church on campus before Cannon Chapel was even built — "when it was being held in White Hall in just folding chairs," she says.

Ray's mother and father graduated from Emory, her grandfather studied theology here, and her sister and brother later went to Emory School of Medicine.

Saliers and Ray met in elementary school in Decatur and began playing music together in high school. Both initially followed the urge to "go away" to college — first Saliers to Tulane University in New Orleans, then a year later, Ray to Vanderbilt University in Nashville.

But they soon returned home to Atlanta and Emory.

"I did my time away and I really wanted to come home and it just so happened that Amy transferred at the same time," says Saliers, who came to Emory after her sophomore year, while Ray transferred after one year.

As with many long friendships, recollections aren't always the same – Saliers says the two didn't plan to transfer to the same school, and Ray remembers it somewhat differently.

"I remember knowing she was," Ray says. "Music was really important, and even though we weren’t as consistent as we became when we got to Emory, in my mind it was one of my main priorities."

Either way, says Saliers, "I feel like there was almost a mystical guide to go back, go to Emory and start playing seriously with Amy.

"And all of that happened, and here we are now all these years later with our career and still with strong ties to Emory."

Thinking back on their years on campus, Saliers and Ray offer a mix of memories likely shared by many alumni.

"I remember going to watch the women's basketball games, going to Jagger's Pizza and Everybody's, and just hanging out with my friends, and really good professors," Saliers says.

Both also remember when the Woodruff P.E. Center opened in August 1983. "It is such a great gym and I thought it was the greatest perk in the world," Ray says.

Ray lived on campus when she first transferred to Emory, yet found that dorm life and the demands of being a budding singer-songwriter didn't quite mesh. "It was basically a study lounge converted into a room for three people, and I was always banging around late at night bringing my guitars in and waking everybody up, so I quickly got an apartment because I realized that wasn't going to work," she says.

Balancing schoolwork and music required creative scheduling — and the ability to get by on very little sleep. "I remember going to the library to study late at night after gigs or whenever I could find the time," Ray says. "I was playing all the time and studying after gigs and in between things — just trying to do everything at once, so some of it feels like a blur."

While the days may have felt like a blur, Ray and Saliers' shared future as musicians was quickly coming into focus during their Emory years.

They played constantly on campus, around Atlanta and in small venues outside of Georgia.

"There was a bar called The Dugout, it was a great hangout across the street from campus on Oxford Road, and we played there all the time," Ray says. "We also played concerts at Turman all the time."

After performing as Saliers & Ray and the B-Band, they picked the name Indigo Girls — choosing "indigo" from the dictionary — in 1985, wanting to have a real band name before playing an important show as an opening act at Atlanta's Moonshadow Saloon.

Also in 1985, the year Saliers graduated, Indigo Girls began recording their music to sell and distribute: Their homemade cassette, "Blue Food," featured songs recorded live at The Dugout, and their first studio single, "Crazy Game," came out on vinyl and was sold at the campus bookstore.

"Emily graduated a year before me so we would go on a tour and I would miss a week of classes, and I would arrange basically for an independent study program," Ray says, praising her professors for supporting her music.

"When I look back, I'm not sure I would be that great if my student wanted to be playing in Pennsylvania when I was giving an exam," she notes, laughing.

Many of the songs on their first full-length album, 1987's "Strange Fire," were written while they attended Emory, and Ray recalls performing the title song and others in a play at Emory called "The Mysteries." Several tunes on 1989's "Indigo Girls," the duo's first album after they were signed to Epic Records, also date back to their Emory years.

"I remember writing 'Land of Canaan' and playing it at a party of Emory people, and I remember writing 'Kid Fears' — starting it before I graduated and finishing it after," Ray says. "All of those songs really grew out of friends I had at school, people I was playing music with during my time at Emory."

Both English majors, Saliers and Ray credit their professors and coursework for helping them learn the craft of writing — lessons they translated from term papers to song lyrics.

"We laugh that I didn't use my degree for my career, but that's not true," Saliers says. "I really did in many ways."

"I think when you completely submerge in the great sea of literature, it just affects your writing," she explains. "Having read so many amazing authors during my time at Emory and having such great professors in English, it made me want to become a better craftsperson, a better songwriter."

Ray, who double majored in English and religion, believes her years on campus helped inspire her to think deeply about issues.

"Religion encompasses so much — it encompasses history and philosophy and literature, so I learned a lot about language, about metaphor and reaching beyond your own perspective to write," she says. "And as an English major you just write so much that I learned the discipline of writing."

Yet asked what they learned at Emory that they would most want to impart to their own young daughters, both looked beyond specific coursework to broader lessons. Saliers' daughter, Chloe, is 2 ½ years old; Ray's daughter, named Ozilline after Ray's grandmother, is a year younger.

"Ironically, I learned not to believe everything that you are taught," Saliers says. "When I first got to college, I thought every book in that library must be true. I really learned at Emory to be discerning, and that was a very important lesson to me. … We want to give her the freedom to shape her own future."

For Ray, her own journey through Emory to music offers a lesson in the importance of pursuing your dreams.

"I learned a lot about compassion through relationships with professors and other students," Ray says. "Another thing that school taught me is that, whatever path you are on, you have to go for it all the time."