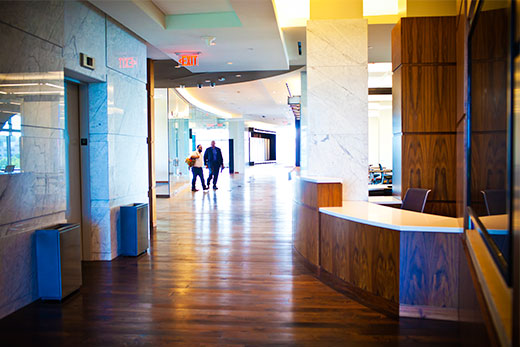 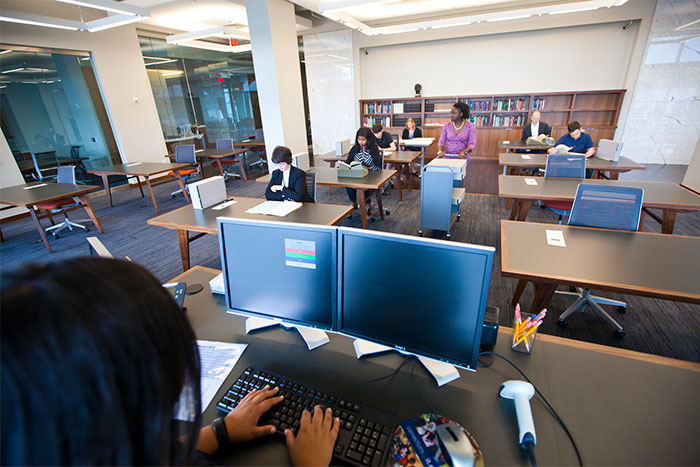 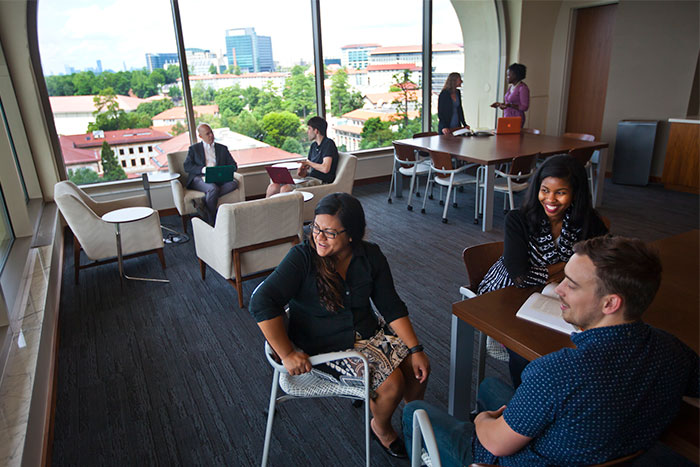 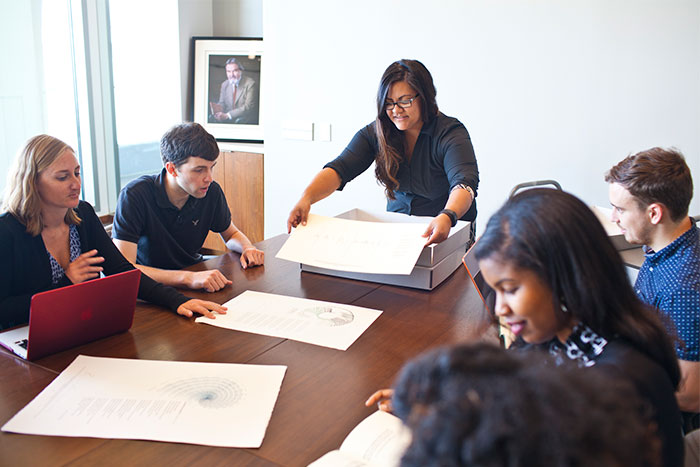 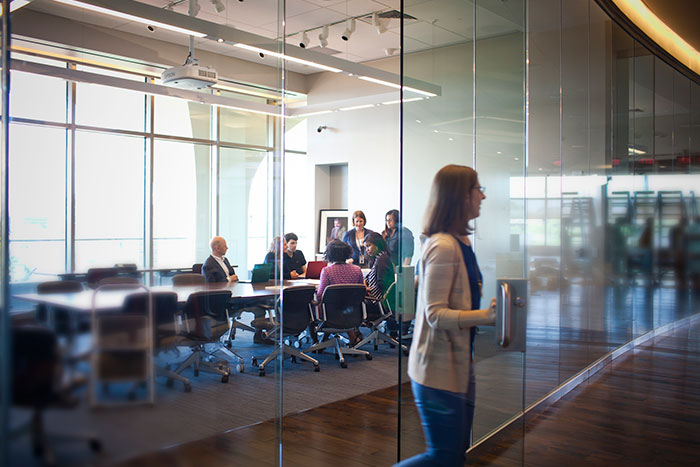 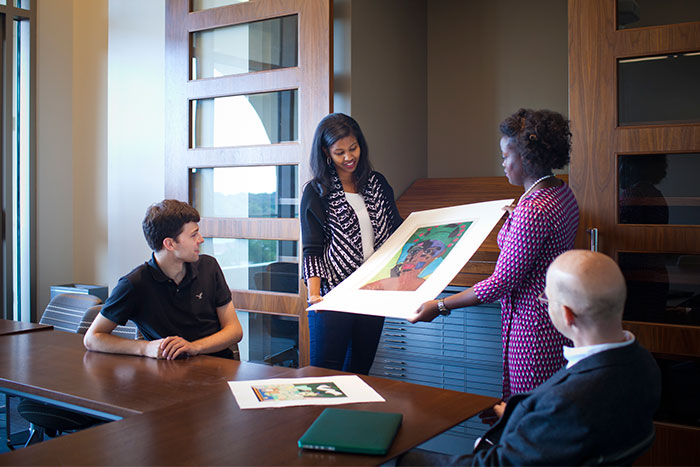 • Southern history was Emory's first collecting focus at MARBL. Two-thirds of the collections are related to Southern history, with the largest focus on Civil War materials.

• MARBL's collections of African American history, culture and literature are now among the strongest in the nation.

• MARBL's oldest manuscript item is a page from "The Homilies" of St. John Chrysostom, Archbishop of Constantinople, 400 CE.

• The smallest items include miniature books less than three inches long, among many other engaging artist books

• One of MARBL's largest volumes is John James Audubon's "The Birds of America," which measures more than three feet long.

As the doors open to Emory's newly renovated Manuscript, Archives and Rare Book Library (MARBL) on the 10th floor of the Robert W. Woodruff Library, visitors will enter a sleek, expansive world of inquiry.

The transformed space now showcases updated technologies and dedicated teaching spaces, enhanced public spaces, room for interactive exhibits, and sweeping vistas that lend views of both the Emory campus and the Atlanta skyline.

Beginning this week through September, visitors can preview MARBL renovations even as work continues on the finishing touches; more public opening celebrations and events will begin in October.

Although MARBL maintained public access to its collections in temporary spaces during a year of construction, the renovated space unites class and conference rooms, smart seminar spaces, a reading room and adjacent folio room, reception and exhibit spaces, and administrative offices on the same floor.

But beyond the elegant aesthetic is a space that simply offers more of what MARBL does best — providing access to rare, original materials and internationally acclaimed collections that are meant to invite discovery.

Overall, the transformation offers a facility that now matches the distinction of the MARBL collections, says University Librarian Yolanda Cooper.

"We were able to gain significant square footage — about 4,300 square feet — and create exceptional spaces to fully support the stewardship of MARBL's collections and increase our capacity for teaching and programming," Cooper explains.

"That will provide the perfect forum to enable faculty and students to utilize and explore these collections in an extraordinary way," she adds. "I'm looking forward to the reaction from the campus and the broader community."

That won't take long. Even as MARBL's reading room was preparing to open on Monday, Aug. 24, researchers were already making reservations, says Courtney Chartier, head of research services for MARBL.

All told, evidence of a MARBL in motion.

The MARBL expansion represents the first major re-envisioning of the facility since 1969, the year that Woodruff Library was constructed, says MARBL Director Rosemary Magee.

Although Emory's first special collections were likely acquired by former Emory President Warren Candler in 1911, it would be decades before a room dedicated exclusively to rare books and manuscripts was formally established in Candler Library, finally emerging around 1942.

Eventually the 10th floor of the Woodruff Library was designated to house the university's special collections, according to Magee.

The continued growth of MARBL's collections, coupled with an increased demand for MARBL-based teaching and collaborative projects, and plans for student engagement within Emory's QEP, "The Nature of Evidence," led to a realization that "current space and configurations no longer fit campus needs," adds Magee.

And so plans were set in motion to expand and strengthen what is widely considered one of Emory's most distinctive resources, Magee says.

For at least 100 years, Emory has been collecting important manuscripts relating to Southern history, modern politics and the university's archives. Collections later expanded to include materials in 20th century poetry, African American literature and Georgia authors, among others.

In fact, it was the literary manuscripts and letters of Irish poet W.B. Yeats — an acquisition championed by Richard Ellmann, Emory's first Robert W. Woodruff Professor — that would form the cornerstone of today's expansive literature and poetry collections, says Ron Schuchard, Goodrich C. White Professor of English Emeritus at Emory.

Today, MARBL holdings include a wide array of rare books and printed materials, including literary papers reflecting the work of acclaimed poets including Ted Hughes, Langston Hughes and Seamus Heaney and award-winning authors such as Salman Rushdie, Flannery O'Connor and Alice Walker.

Inviting students 'to the feast'

As an undergraduate, Schuchard had no clue where the special collections were kept at his own university. He recalls the archives as "an absolutely uninviting place" where students weren't welcome.

"Consequently, all over the world undergraduates in the most formative years of their intellectual lives were excluded from the wonders they had been studying, with no opportunity to see original material — to work with it, to handle it, to be awed by it, " Schuchard says, comparing the experience to teaching science without a hands-on laboratory.

But Emory has long employed MARBL as a teaching tool, notes Schuchard, who serves as a MARBL faculty advisor. "Over the years at Emory, we brought classes into the MARBL archives, laid out manuscripts — all of the rich wonders — and watched student jaws drop," he says.

He's observed students marvel at Yeats' handwriting in the margins of a book or a poem scribbled on endpapers. Watching a class work with Nobel Prize winner Seamus Heaney's papers one day, Schuchard recalls a student who quickly excused himself to phone his mother. "She's not going to believe this," he explained.

Today, the opportunity for undergraduates to engage with MARBL materials remains one of the university's great strengths, according to Schuchard.

"We've become national leaders in undergraduate education by including undergraduates in the feast," he says. "For the last several years, more Emory undergraduates have used MARBL than all the professors and graduate students put together."

According to Chartier, out of nearly 1,000 researchers who typically visit the MARBL Reading Room each academic year, about 51 percent are visiting researchers from outside Emory and 30 percent are Emory undergraduates.

A spark that ignites scholarship

Carol Anderson jokes that Emory employed a secret weapon during her initial interview. "They said, 'Why don't you come over to our library?'" she recalls. "It was the first place they took me, and I was salivating."

Anderson quickly began thinking about how she could use MARBL in her teaching "to engage young people in critical thinking and heighten their writing skills."

"MARBL is this incredible place where students find their research voice," she says.

Anderson has seen MARBL materials ignite a spark within her students, such as the freshman who became fascinated with materials on Hank Aaron and wrote a paper that was eventually shared with the baseball legend. Or the undergraduate who used MARBL's vast Robert Langmuir photo collection to analyze the role of photography during the U.S. civil rights movement.

"I've seen those kinds of papers provided as the writing samples that get students into top graduate programs," Anderson says. "That's because through MARBL, the rigor is there."

As vice president and deputy to the president and historian of Emory, Hauk is a frequent visitor. This week, he'll be poring over the letters of Coca-Cola founder Asa Griggs Candler, whose philanthropy helped Emory University move from Oxford, Georgia, to Atlanta.

Within Candler's correspondence to his children while they were at Emory, Hauk will see typical parental concerns. But he'll also be looking for clues for Candler's reactions to the Atlanta Race Riots of 1906.

"One of the great things that's been happening at MARBL is the digitization of resources," Hauk says. "By checking online, I can often sit at my desk and access all Emory yearbooks going back into the 19th century, which is really useful."

But he also welcomes the chance to work among familiar materials in a refreshed environment, not unlike rediscovering an old friend. To see the reimagined MARBL in its finished form has been "a revelation," he says. "It's beautiful."