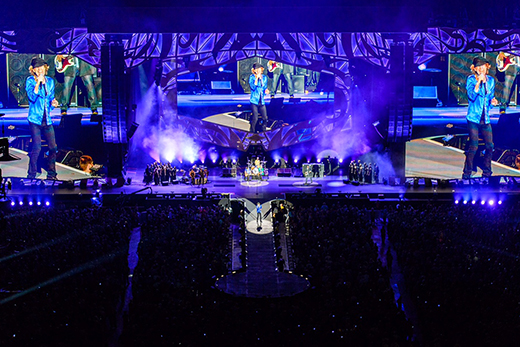 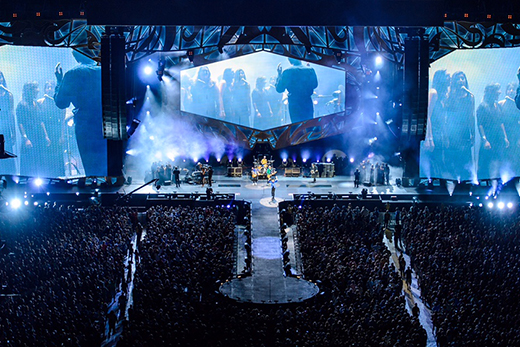 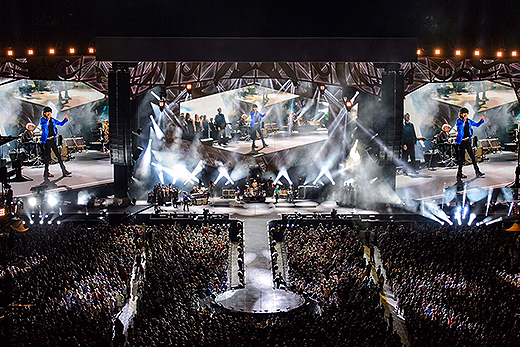 The Emory University Concert Choir performed “You Can’t Always Get What You Want” with the Rolling Stones during the encore of the legendary band’s June 9 concert at Georgia Tech’s Bobby Dodd Stadium. Photos by Danny Karnik / Georgia Tech Athletics

They say you can’t always get what you want — unless you happen to be the Emory University Concert Choir, which received the invitation of a lifetime when asked to sing backup at the Rolling Stones concert Tuesday night in Atlanta.

Appearing before an estimated 55,000 fans at Georgia Tech’s Bobby Dodd Stadium, a select group of Emory singers took the stage to perform the iconic choir sequence that launches the Stones’ classic “You Can’t Always Get What You Want,” one of two encore numbers that closed the sold-out show.

As part of their 2015 "Zip Code" North American stadium tour, the Rolling Stones typically reach out to community choirs to provide vocal accompaniment on the song. But news of who that will be is usually kept under wraps.

Concert Choir Director Eric Nelson, professor of music and director of choral studies at Emory, says that an invitation to perform with the legendary rock-and-roll band arrived in March under a thick layer of confidentiality.

“I received an email from the Stones’ management announcing that they were coming to Atlanta and would we be interested in providing a choir for their concert,” he recalls. “My answer was ‘Absolutely.’”

Why Emory? Nelson says he likes to think “it’s because we have a reputation as being one of the finest choirs in this city. Emory has a long tradition of a really fine choral program, going all the way back to the 1940s.”

Emory Concert Choir members didn’t realize that an invitation had come their way until around mid-April, when Nelson began dropping hints. The news was greeted with “a mixture of joy and disbelief,” he says.

“We perform music of all styles and periods and varieties and pride ourselves in doing them excellently,” Nelson says.

“But backing up one of the most famous rock bands of all times is definitely not something we get to do all the time, and it was thrilling and amazing,” he adds. “Then to sing that song, it was kind of a perfect alignment of the planets. We were so honored to be asked.”

By the last rehearsal of the spring semester, the choir had received the music and was running through it. Traditionally performed by a British boy’s choir, the introduction to the song was immediately familiar to the students. “That may be why they came to a college, rather than a choir of adults,” Nelson says. “We were probably closer in sound to the original recording.”

When asked if he could provide 24 singers for the June 9 concert, Nelson says he initially had his doubts. Would students be willing to return from summer vacations for the show?

As it turned out, there was nothing to worry about. “We had students who flew back to Atlanta to have the chance to perform on stage with the Stones,” he says. “They didn’t want to miss it.”

On Tuesday, the singers showed up at the stadium for an afternoon of rehearsals — an experience that proved a master class of sorts in how a massive arena concert is put together, says Concert Choir President Katie Boice, a rising senior majoring in psychology and music.

“It was so impressive to see all the people required to produce a show like this, from the sound check people to the performers, all working together like a well-oiled machine,” says Boice.

Even rehearsals offered an education. “Most of us had never sung using earpieces before, or performed with fog machines behind us, or had the experience of trying to hear the music over the crowd,” she says. “There were lots of new things we usually don’t experience in concert choir, but we are the wiser for it.”

Neither Nelson nor his singers had ever performed before an audience of 55,000 fans. Boice found the experience unforgettable.

“Just knowing that you are part of this experience for the audience — seeing this massive crowd on their feet and screaming and just loving it. And knowing we are as essential to this song as Mick Jagger or Keith Richards and any of these famous musicians, who really do make you feel like you’re part of the Rolling Stones family, really made us feel that we were valued as artists,” she says.

During the first half of the Rolling Stones’ 19-song set, the Concert Choir was able to observe the show from box seats. “The whole thing was just surreal,” Boice says. “ I think everyone woke up this morning expecting to have dreamt the whole thing — it was such an honor.”

For Nelson, the highlight was “pride in the professionalism, ability and flexibility of my singers.”

“For my students, I think it’s something you put on your resume and something you tell your kids,” he says. “We use the term once-in-a-lifetime opportunity pretty freely, but this was one.”

“Let’s be clear: It was eight minutes – a tiny moment — but it was an iconic moment. For us to be a part of that was really great.”