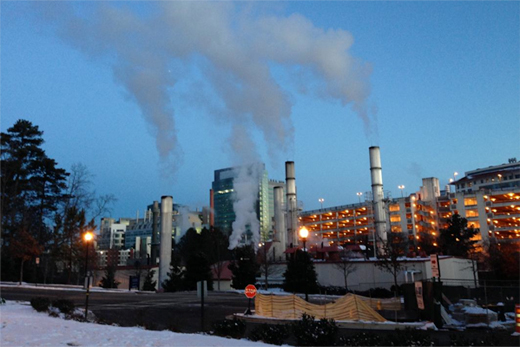 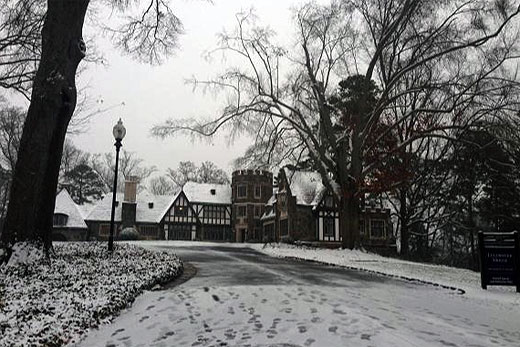 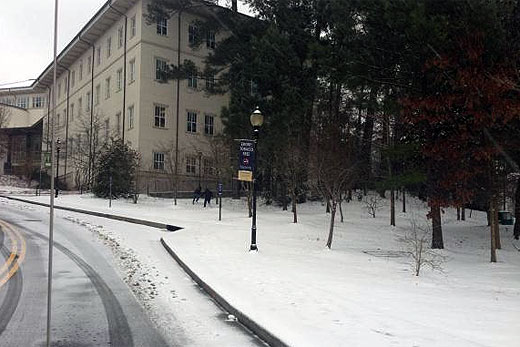 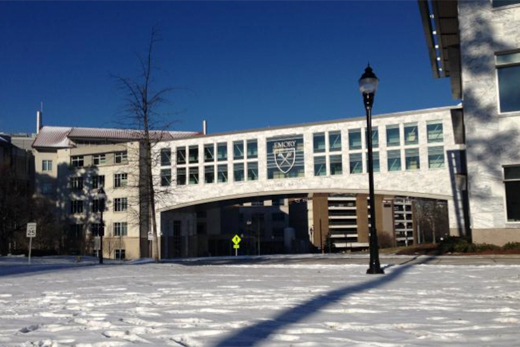 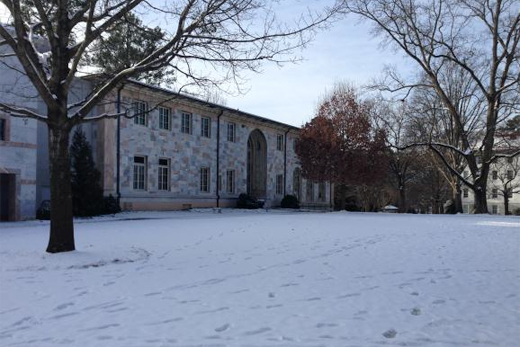 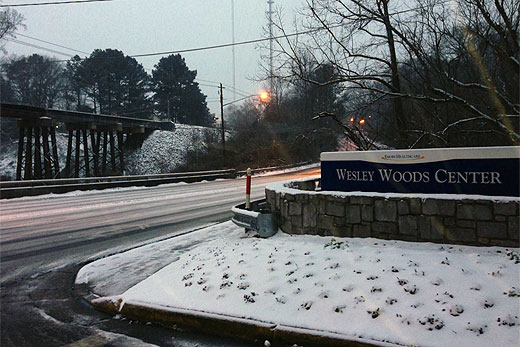 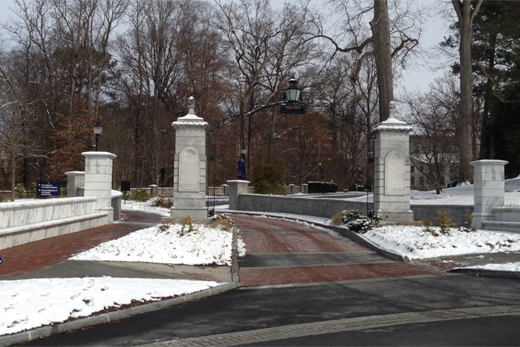 Photos by Todd Kerzie, Associate Vice President of Campus Services:
"I know many who can't be here will never get to see the campus like this, the awesome beauty of Emory wrapped in its blanket of snow."

UPDATED: 1/31 — Emory University opened Friday, Jan. 31, after being closed for two and a half days due to severe weather conditions.

The University closed early Tuesday, Jan. 28 and remained closed Wednesday, Jan. 29 and Thursday, Jan. 30.  Staff went into action to keep critical facilities open and operating and to keep student residence halls accessible and services available following a winter storm that brought much of metro Atlanta to a standstill.

Concern for the safety of Emory community members guided the decision, said President James Wagner, who acknowledged in a campus-wide announcement that the week has brought “challenges to many in our community, and our concern and compassion go out to those who have experienced unusual difficulties.”

During the storm and its aftermath, the campus was closed except for essential personnel and Emory Healthcare employees. Efforts were made to maintain access to the hospitals — which remained open — and clear roads to support that mission, “ensuring that students having access to dining facilities, ensuring that we can maintain utilities and public safety efforts with police patrols," said Sam Shartar, senior administrator, of Emory's Office of Critical Event Preparedness and Response (CEPAR).

Emory Police Chief Craig Watson cautioned that although the campus was "beautiful" to look at, travel conditions on the roads within and around campus for much of the week were "still nasty,” although conditions were expected to improve by Friday.

Most cars stayed off campus roadways mid-week but some cars remained abandoned along the Clifton Corridor, Houston Mill Road and Clairmont Road, Shartar said, who noted that abandoned vehicles were being steadily retrieved as the weather improved.

While Clifton was passable for emergency vehicles through the week, driving was strongly discouraged. During the iciest conditions, Houston Mill Road, with its steep hill, was completely shut down with a multitude of vehicles abandoned there, Watson said. By Thursday, it had reopened.

As the week advanced, warmer temperatures improved driving conditions on the roadways in and around campus, although Shartar cautioned early morning commuters to be wary of possible patches of black ice.

As of late Thursday,, no major incidents on campus had been reported due to the weather and conditions, said Watson.  Shartar confirmed there were no injuries reported on campus "that we're aware of at this point that are directly related to the weather event."

CEPAR continued working throughout the week with the National Weather Service to monitor conditions and coordinate emergency response efforts with the DeKalb Emergency Management Agency and partners on the Clifton corridor, the Centers for Disease Control and Childrens Healthcare of Atlanta.

During the campus closure, Emory University Hospital (EUH) remained open, including the cafeteria, which provided an option for meals for Emory Healthcare and University employees remaining on campus such as Emory police and Campus Services staff.

As the weather crisis lingered, Healthcare staff pitched in to help in a variety of areas. When an EUH patient needed emergency surgery for a detached retina Tuesday night, surgical technologist Curtis Adams managed to travel from his home to conduct the surgery and Emory Healthcare sent a four wheel drive vehicle to pick up Delores Dye, a specialty nurse whose skill was necessary for the surgery. The procedure went smoothly and was a success.

In a campus-wide email, President Wagner expressed gratitude for “the extraordinary dedication of the many employees who have worked throughout the weather emergency to keep our buildings warm, our campus roads as clear as possible, our food services operating to the extent necessary, our emergency information up to date, and our students safe.”

After a January 2011 ice storm paralyzed much of metro Atlanta, the University prepared for future storms by purchasing  equipment for plowing and shoveling streets, Salisbury said: "We have a bunch of great equipment."

“We were running low on sand and Sam Shartar talked to DeKalb County to let us ‘borrow’ some sand for our roads, she said.

"There have been no broken pipes, no loss of power. We've been blessed," Salisbury added.

For on-campus transportation, Salisbury noted that the C shuttle, from the Clairmont campus, used by many Emory Healthcare employees, was the only shuttle running, following its normal schedule and route. And the Clifton Corridor Mass Transit Authority (CCTMA) shuttle was also operating.

"We have 60 people as being on our 'essential' list," she said. "It's quite a commitment." However, for this effort, Campus Services has been averaging about 105 people, depending on the day or shift.

Working in shifts, Salisbury said a few were able to get rooms at the Emory Conference Center hotel but most slept on cots or even office floors, like Associate Vice President of Facilities Management Todd Kerzie did.

The cold weather also put the campus steam shop on curtailment for natural gas use, so fuel was being used. "We're coordinating getting the fuel trucks in” for re-supply, she said.

For inclement weather, "we have a whole system in place," Salisbury noted. "We're getting better and better in our planning and responding to these situations. We have an amazing team. I love being a part of something where everybody is stepping up to the plate to help."

On campus, Emory students explored the snowfall with smartphones and snowplay. But aside from cancelled classes, campus residents still had heat, wi-fi and cable services, as well as food service. Some shuttle service was running Wednesday to ferry students from Clairmont to Emory's main campus.

"If you're a student in a residence hall, you have heat and cable and food services available at the DUC (Dobbs University Center), and you can play in the snow — it's probably one of the better places to be to wait this out," Kayla Hamilton, associate director of residence life at the Clairmont Campus, observes.

Dobbs Market, in the Dobbs University Center, remained open and operating on weekend hours, 10 a.m. to 1 p.m. for brunch and 4:30 p.m. to 7 p.m. for dinner. The Emory Market in the SAAC was closed, but plans called for it to open as staffing allowed.

Andy Wilson, senior associate dean for external relations in Campus Life, said residential students with questions or concerns were encouraged to reach out to live-in staff on the campuses, who helped them to the best of their abilities given the current conditions.

Students with appointments through Emory Student Health and Counseling Services at the time of the closure are encouraged to call and reschedule. Those with urgent problems were asked to reach out to on-call physicians at 404-727-7551.

Some Emory employees who commute only a few miles to campus each day reported that the trip home grew to several hours, as traffic slowed to a crawl.

"One of my co-workers who lives out around Stone Mountain said that it took her three and a half hours to make it home," said Hamilton, the administrator on the Clairmont Campus.

"Because I live at Clairmont, I was one of the lucky ones — my commute was pretty easy," Hamilton adds.

"But another co-worker, who lives in a condo just up the hill from Clairmont, said that she left work at 4:30 p.m. and it took her an hour to get from Starvine (deck) to the V.A. Hospital. She finally left her car at the V.A. Hospital and walked home because she was afraid that other drivers couldn't get their cars up the hill."

Other employees reported long waits to get out of Emory parking decks, as many motorists attempted to leave campus around the same time — an issue that created traffic snarls throughout the metro region. The Emory Conference Center Hotel off Clifton Road was filled to maximum capacity — a majority were guests seeking shelter due to the weather, a spokesman reported.

Although weather conditions closed much of the Emory campus, some employees found creative ways to keep business moving forward. As the snowfall started Tuesday, Sherry Ebrahimi, Emory's director of university conferences, was wrapping up an on-campus interview with a candidate applying for an associate director's position in her office.

"Halfway through the interview, we realized his flight back home was cancelled. We spent the rest of the day rebooking and got him on a MARTA train going back to the airport, where he spent the night and didn't get out until 8 this morning," she recalled.

As for a second candidate due in for interviews on Wednesday? "He flew in for a full flight of interviews today, and we were able to get him one of the last hotel rooms at the airport — by 3 p.m., the hotels were saying that every property in Atlanta was booked," Ebrahimi reported.

With the aid of technology, she was able to pull it off: "Our candidate started interviews at 9 a.m. this morning with Facetime," she said. "The search committee was doing an interview via Google Hangout at 12, and he has a Facetime interview with my boss, at 1."

"By the time we're done, he will have talked to a good 16 people from Emory today," said Ebrahimi.

Hotel scarcity impacted Emory police, too. Usually, officers who work at Emory Midtown Hospital are housed in hotels when on long storm duty. But the storm hit while several conventions are going on, so hotels rooms in Midtown proved scarce, Chief Watson reports. "We're (were) shuttling workers back and forth between the Druid Hills campus and Midtown," he said.

While officers were told to come prepared, with a change of clothing at least, "we were scrounging" for sleeping facilities, he said. "We were able to get rooms at the [Emory] Conference Center and Campus Life was able to come up with one or two spare rooms."

While weather closings at Emory are rare, they aren't unprecedented, according to Gary Hauk, vice president and deputy to the president and historian of Emory.

"The worst I can recall was in January 2011, when the snow and icefall were greater than this time and the temperatures stayed below freezing for most of a week," Hauk recalled. "It was the first week of classes in the spring semester, I believe, and we all got off to a late start."

Hauk also recalled an unusual winter storm that struck mid-March 1993, ushered in over a weekend by blowing snow and thunder. "Things had not cleared enough by Monday for Emory to open, so there was at least one, maybe two days of canceled classes."

Watson said a "huge amount of kudos" go to Shartar and CEPAR for diligently tracking the weather and keeping departments updated and also to Campus Services and the around-the-clock work of de-icing and sanding to keep access to the hospitals and residence halls safe and clear.

For more weather updates and the latest news on cancellations, call 404-727-1234 or go to emory.edu.