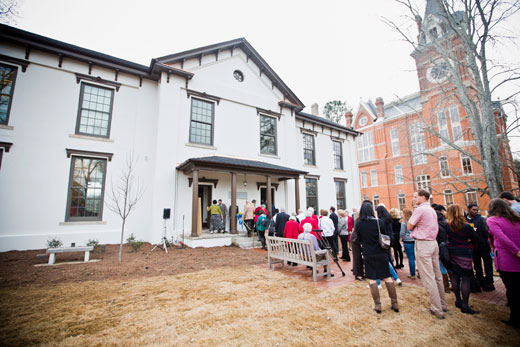 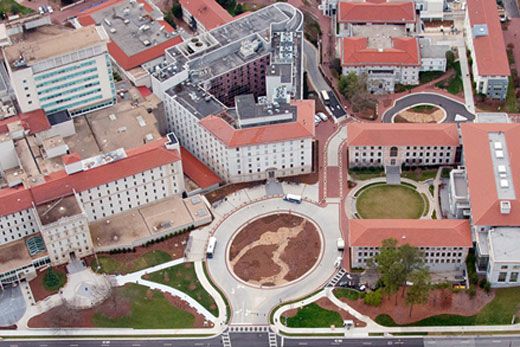 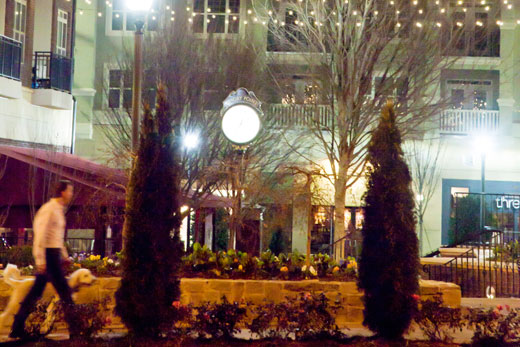 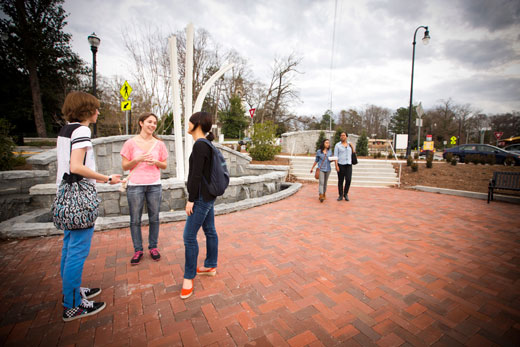 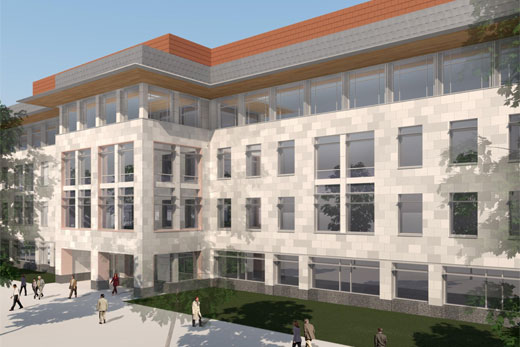 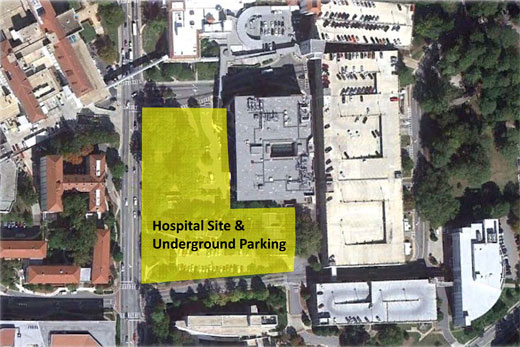 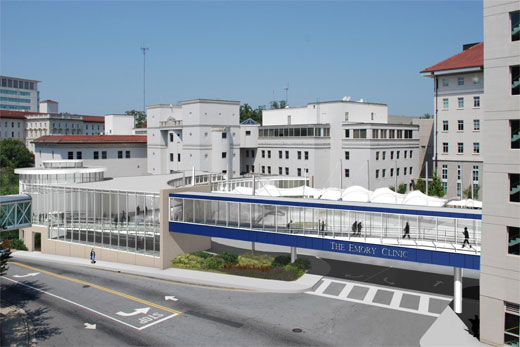 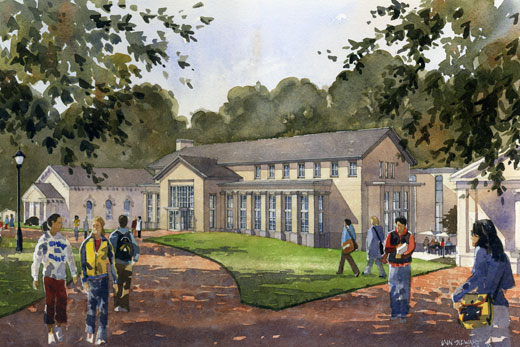 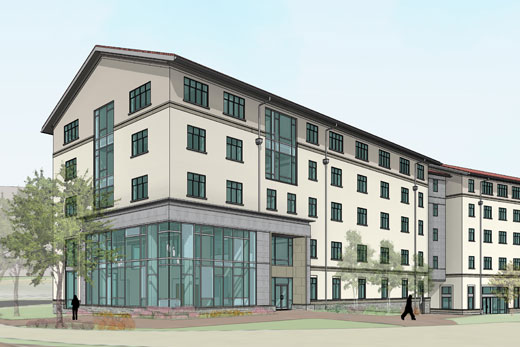 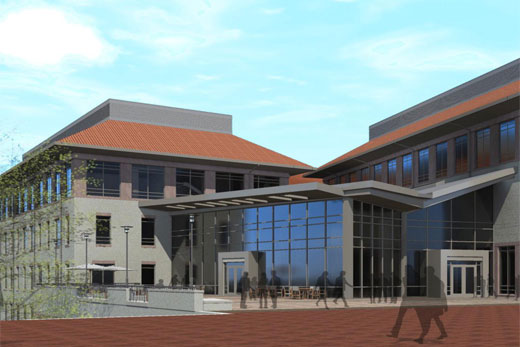 The changing landscape on campus and in the surrounding area is enhancing Emory's living and learning experience, providing state-of-the-art space for research, teaching and patient care, and inspiring community engagement.

Following an extensive restoration, Language Hall has re-opened for spring semester classes, an 1874 structure ready for the 21st century. The six-month project reconfigured the building into four classrooms with state-of-the-art technology, brought it up to Americans with Disabilities Act standards, installed modern finishes in the interior and made improvements to the infrastructure. On the exterior new finishes are reminiscent of the building's original design, and an addition on the building's south side provides six new faculty offices, ancillary space and a required second exit stair. A grand opening on Jan. 13 celebrated Language Hall's new lease on life.

Related Story: Built in the 19th century, restored for the 21st

The realignment of Woodruff Circle has created a safer, more efficient hub for shuttle buses and pedestrians. New bus shelters were installed and trees and shrubs were planted around the redesigned circle and in front of the Emory University Hospital. The project also added a new drop-off and pick-up area now accessible by vehicle from Means Drive, leaving Woodruff Circle as the designated entry and exit to and from Clifton Road, with access restricted to shuttle buses and delivery trucks.

Emory Point is open for business and has quickly become a destination for shopping and dining for people who live, study and work in the Clifton Corridor. Located near campus on Clifton Road, the mixed-use development has 80,000-square-feet of street-level retail space that houses restaurants and retailers. The development includes apartments that are managed by Gables Residential.

The 8,000-square-foot Emory Village pocket park on North Oxford Road is a new public green space and gathering spot. Highlights include a water feature and a trolley rail sculpture that towers over the brick plaza. The park was spearheaded by the nonprofit Alliance to Improve Emory Village. Construction funding for the park came from generous community donations by individuals as well as local businesses and institutions.

The Health Sciences Research Building, a leading-edge 200,000-square-foot, four-story biomedical research complex on Haygood Drive, will serve as the University's expansion of research initiatives and pediatric research. A partnership between Emory University's Woodruff Health Sciences Center and the Children's Healthcare of Atlanta, the facility provides state-of-the-art research laboratories, both wet and dry. A 150-seat auditorium, a café and collaboration space will also be incorporated in the design. Construction is slated for completion this spring.

At Emory University Hospital, a wider valet parking drop-off area has been completed and is running smoothly. Improvements have also been made to the main entranceway into the hospital, including the addition of extra benches and large potted plants with seasonal flowers. On the other side of Clifton Road, at the site of the new nine-story bed tower, digging is well under way. The bed tower will sit on an underground parking deck. Crews will dig for the next six months to ready the site for the future parking structure. The new hospital tower will provide additional beds and operating rooms on the Clifton campus.

The project to expand and improve patient access to the Emory Clinics related to the Emory University Hospital expansion has seen great progress. The new elevated pedestrian bridge, which provides above-ground access for patients, visitors and staff from the Lowergate Parking Deck to the clinics opened in late October. A larger, renovated lobby in Clinic A should be finished by late February.

The basic structure of the addition, located on the building's east side and facing the Oxford quad, is complete. With winter here, the work site is weathered in.  Sub-roofing is installed, and the installation of new windows has begun in the original structure. In the interior, framing is complete and the hanging of insulation has begun, with drywall work not far behind.  Completion is planned for later this spring.

Freshman Hall Phase Five is slated to open for occupancy in August 2014 as a five-story, LEED Silver certified building with the capacity to house up to 341 students. The residence hall will include sustainable technology features that include an air conditioning system that has an energy recovery system and outside air economizer that increases air quality and reduces energy use.

Candler School of Theology is moving forward with the second phase of its new building program. The first building—a 65,000-square-foot facility completed in 2008—was recently named the Rita Anne Rollins Building. Anticipated to open the fall 2014, the second phase will provide space for the Pitts Theology Library, the third-largest theology library in the country, and the new Wesley Teaching Chapel. Bishops Hall, which served as Candler School of Theology's home for more than 50 years, will be demolished this spring prior to construction. The new building will connect to the Rita Anne Rollins Building via an atrium, and will feature group study areas, a lecture hall and an exhibit hall with smart technology. It is designed to achieve LEED Silver-level certification.