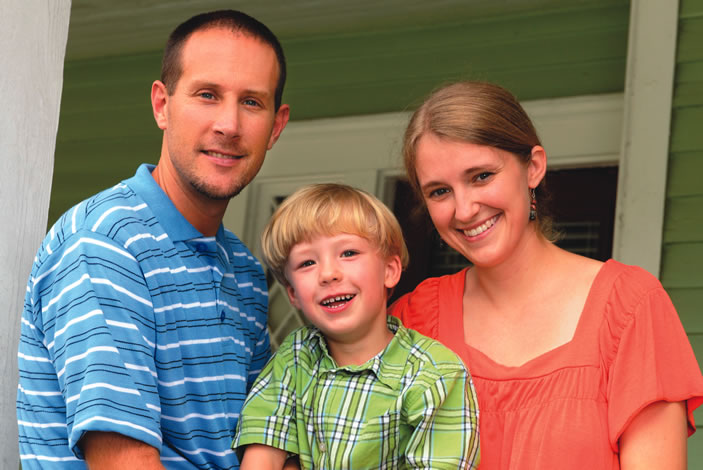 Ryan and Stephanie Harry work to raise awareness and support for metabolic disorder research at Emory, not only for their son Christopher but also for all children with these rare conditions. 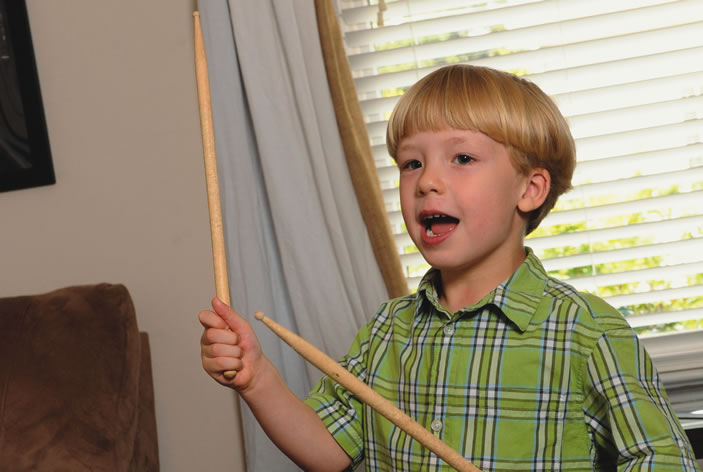 Watching Christopher Harry whack a baseball with a bright orange, plastic bat or hearing him pound a syncopated beat on a small drum, you'd never guess that the energetic 4-year-old has a rare metabolic disorder. 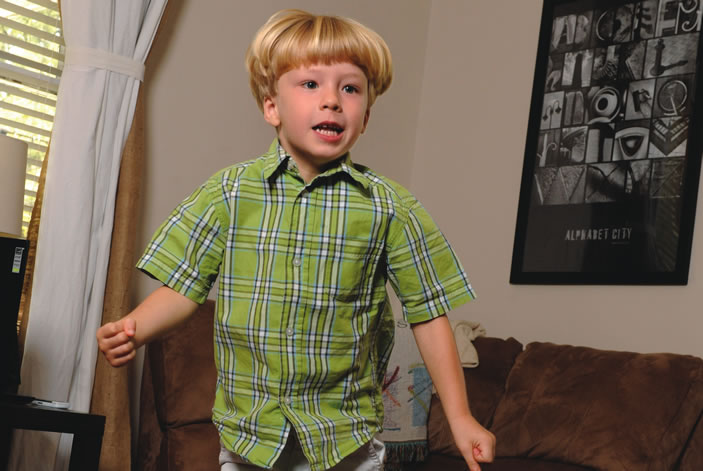 Christopher was the first baby born in Georgia to be identified with Long-chain 3-hydroxyacyl-CoA dehydrogenase (LCHAD) deficiency through newborn screening soon after the disorder was added to the newborn screening panel in the state. 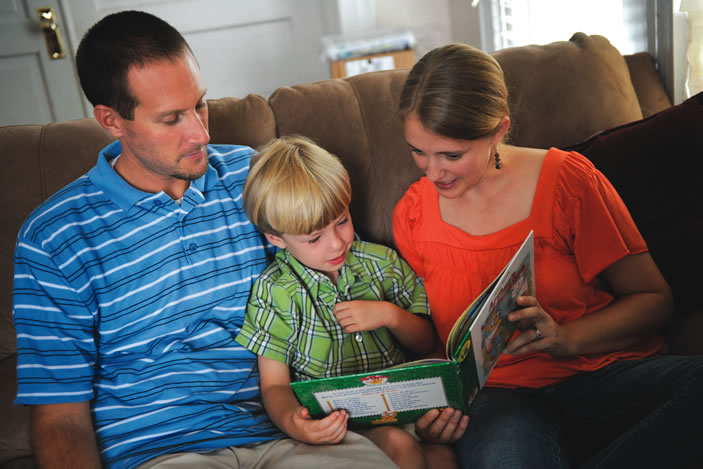 LCHAD deficiency is a rare inherited fatty acid oxidation disorder (FAOD) in which the body is unable to break down certain fats to use for energy. 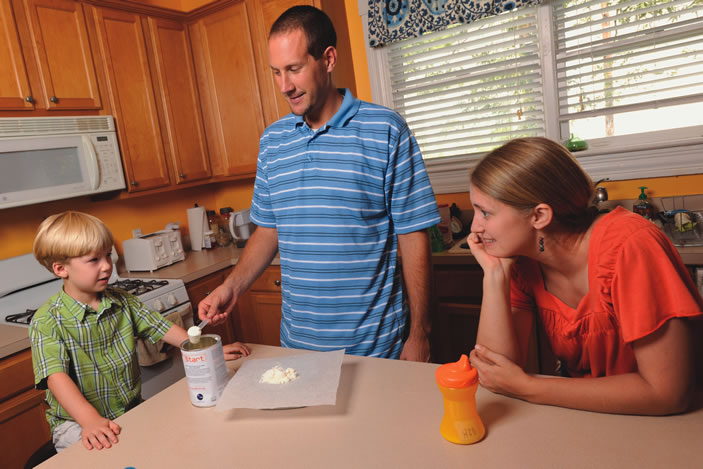 The Harrys, however, are not without help or hope. As soon as Christopher's newborn screening test showed an abnormality, the Emory Metabolic Genetics Nutrition Program has been there for the family.

LCHAD deficiency has robbed children of their sight, then their lives, but Emory researchers are out to change that. Here, Ryan and Stephanie Harry with their son Christopher. Photos by Jack Kearse

Watching Christopher Harry whack a baseball with a bright orange, plastic bat or hearing him pound a syncopated beat on a small drum, you'd never guess that the energetic 4-year-old has a rare metabolic disorder.

Long-chain 3-hydroxyacyl-CoA dehydrogenase deficiency may be too big a mouthful for Christopher to pronounce, but he knows what LCHAD means. It means his body is special. It means he can have only a few grams of fat a day. It means he needs to eat often, every two hours or so, to give his body enough energy to grow.

Christopher was the first baby born in Georgia to be identified with LCHAD deficiency through newborn screening soon after the disorder was added to the newborn screening panel in the state. His mother, Stephanie Harry, almost died when she developed a potentially fatal complication late in her pregnancy. The condition sometimes occurs when the mother is carrying a baby with a fatty acid oxidation disorder (FAOD). Doctors suspect that Stephanie's liver and kidneys may have been trying to compensate for what Christopher's body was unable to process.

Since then, Harry has steeped herself in learning about her son's disorder and how to keep him healthy. She now knows that LCHAD deficiency is a rare inherited FAOD in which the body is unable to break down certain fats to use for energy. She knows that it is so rare—both parents have to carry the recessive gene—and so little understood that many people don't recognize it, even clinicians, who may go an entire career without seeing a single case. She knows that babies who were previously thought to have died of SIDS or liver or kidney failure may actually have had LCHAD.

Harry also knows that when most people exercise or get sick, they use the long-chain fats stored in their body or found in most food for energy. But when Christopher gets sick, he is unable to use this fat for energy. When unable to consume food or medical formula, his body runs out of glucose and starts breaking down muscle, producing by-products that can be toxic. These toxic by-products can affect many systems in the body, in particular the kidneys and heart, leading to serious complications.

This past January, Christopher had his first hospitalization when his blood levels of creatine kinase (CK)—a biomarker used to confirm damage to muscles—shot up to 70,000. By comparison, a marathoner at a race's finish might have a CK level of 11,000, which recovers to normal after rest.

Maybe scariest of all for Stephanie Harry and her husband Ryan, a kindergarten teacher, is the unknown future. Christopher started preschool this fall, and they have to get him through school with the usual exposure to germs that all children face but without the usual resiliency and metabolism that most kids have. And they have to do what they can to keep their blue-eyed boy from losing his sight. Children with the deficiency have a high chance of developing pigmentary retinopathy, which can lead to blindness.

The Harrys, however, are not without help or hope. As soon as Christopher's newborn screening test showed an abnormality, the Emory Metabolic Genetics Nutrition Program has been there for the family. The only program in Georgia to offer complete services for managing metabolic disorders, the clinic follows up on 5,000 abnormal newborn screening tests each year by analyzing biomarkers in blood and urine and confirming a diagnosis. The clinic's geneticists and nutritionists treat some 250 children with metabolic disorders annually while genetic counselors work closely with their families.

Stephanie Harry remembers the first day they met Rani Singh, the clinic's director of genetic nutrition. Christopher was six weeks old and had been discharged from the hospital only two days before. Harry herself was still recovering from liver failure and had a yellow tinge to her skin. "Ryan and I sat down with a woman who had so much warmth and concern for our family," she says. "The news of our son's diagnosis was hard, but after meeting with Dr. Singh and her staff, I felt comforted and blessed that we had such amazing people walking alongside us through unfamiliar territory. We were so vulnerable, but the staff took the necessary time to answer every question that arose that day and in the months to come."

It is families like the Harrys who keep Singh in the clinic, she says. A registered dietitian with a PhD in nutrition, she is actively involved in research to learn more about the 22 known primary metabolic disorders and another 30 related secondary conditions recommended for screening by the American College of Medical Genetics. She is seeking to standardize care in the country, setting up databases for both clinicians and families, advocating for her patients, and arguing for an educational specialty track for advanced practice nutritionists.

Her job can be stressful as the lead dietitian in Emory's clinic. On a recent day, Singh was on deadline for completing a grant application, on the phone to convince an insurance company to cover the costs of a nutrition intervention for a new patient, and closely monitoring the nutritional aspects of another patient who had experienced a sudden drop in heart rate. But despite the pressure that a busy clinical practice adds to her research load, Singh says she wouldn't want to pursue research in isolation.

"It is the connection with patients that makes it feel real," she says. "I look at someone like Christopher, and I know I can't quit patient care."

Singh currently manages six children with LCHAD deficiency. She attributes much of what she's learned about the little-understood disorder to one patient in particular, a young girl who had practically lived in the hospital until Singh entered the picture. The dietitian developed a diet of medium-chain fats for the 8-year-old, resulting in a dramatic decrease in the girl's number of hospitalizations. She saw her patient grow from a child to a young adult, watching as the girl lost first her vision, then use of her legs, and ultimately her life. "She taught me a lot," Singh says.

Children like Christopher Harry have benefited from Singh's experience with her first LCHAD patient. She arranged an overnight shipment of a just-released medical formula from manufacturers in the United Kingdom to Christopher's bedside so that he has been treated since birth. The formula includes a delicate balance of different kinds of fat and fat grams, not enough to overwhelm Christopher's body but enough for brain and eye development. One of its main ingredients, MCT oil, is found naturally in coconut.

The Harrys have become experts in counting fats, which occur even in fruits and vegetables. Coconut oil is a staple in their kitchen, and they even made cookies with it last Christmas. As a baby, Christopher could have no more than 2 grams of fat each day. Now that he's grown, he can have up to 6. He needs to eat about every two hours because his body constantly uses up the incoming sugar, protein, and medium-chain fats. He calls the formula that he drinks his Power Moo.

"We've had to relearn how to cook," says his mom. In her kitchen, she keeps a brown envelope filled with modified recipes that work for the family: steamed vegetables, chicken with a rub rather than a marinade, and pancakes (Christopher's current favorite.)

But the manufactured medical formula, the Power Moo, is what sustains children with LCHAD deficiency. Because the formula is a food rather than a drug, insurance coverage varies by companies and even by month from the same carrier, as the Harrys have experienced. Yet it should be covered, says Singh. "Medical foods—what we call the specialized formulas for rare disorders—are life-saving treatments, and their cost can be high. Plus they have to be given for life," she says. Singh says that it is painful to watch families struggle to buy the formula without insurance help. "We screen every baby as a public health program, but we don't have a program to provide the means to treat every baby. These families fall through the cracks."