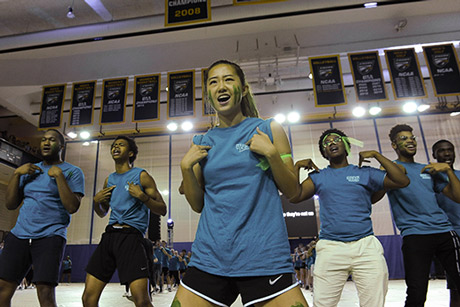 Woodruff PE Center was packed Aug. 29, as first-year students competed in Songfest, a beloved Emory tradition where students from each residence hall perform an original song about their new home.

Emory has a responsibility to foster difficult conversations and teach students to question their biases and listen thoughtfully to viewpoints different from their own, President Claire E. Sterk explains in a new video.

20 years of HIV/AIDS research at Emory

Emory hosted the opening keynote for the Decatur Book Festival and Emory authors were a major part of the festival. Emory's tent in downtown Decatur drew hundreds for book signings, art and the chance to learn about the university's cultural resources.

Photos: Emory in the snow

The Emory campus was blanketed in white Friday when a rare early December snowstorm provided a delightful, unexpected study break for students preparing for final exams.

As construction continues on Emory's new Campus Life Center, students had the opportunity Dec. 5 to have their messages and signatures become a permanent part of the new campus landmark.

In honor of Earth Day, see how Emory is installing solar panels across its Atlanta campus, which will generate approximately 10 percent of the university's peak energy requirements and reduce greenhouse gas emissions by about 4,300 metric tons.

Emory students planned their paths to the polls and let their voices be heard on Election Day.

Welcome back! Aug. 19 marked the first day of classes for Emory's undergraduate students, with new health and safety protocols in place for those who are learning on campus.

The Emory community participated in Denim Day on April 22, an annual event intended to show support for ending sexual violence. Although the event was not in person as in years past, many students, staff and others submitted photos of their participation.

Emory's annual Pride Awards and Women of Excellence Awards were held last week, recognizing students and other individuals who are dedicated to working on behalf of both groups. See some photos from the celebrations.